After the elation of winning the world title Will Bayley was back in the real world today as he and Paul Karabardak began their bid for a medal in the men’s class 6-7 team event at the 2014 ITT Para Table Tennis World Championships in Beijing with a hard-fought 3-2 victory over Egypt.

Bayley made a slow start in his first singles against Rekik Eid and when the class 6 player took a 2-0 lead it looked for a moment as if Bayley’s first match as world champion could be a shock defeat. But the 26 year old from Tunbridge Wells is a born competitor and he raised his game to win the next three sets for the loss of just nine points. The Egyptian number one and world number six Ahmed Sayed Mohamed beat Karabardak 3-0 to level the tie and the Egyptian pair then took the doubles 3-0 to lead 2-1. Sayed is a talented player and was clearly determined to beat the new world champion and when he levelled the match at 2-2 Bayley had to dig deep again to come back and take the match 11-8 in the fifth. It was then down to Karabardak to ensure that the GB pair started their campaign with a win and he responded superbly to beat Eid 3-0 and clinch the tie 3-2.

“It was very hard to play today,” admitted Bayley. “Yesterday was a hard day - I didn’t have a lot of energy and didn’t prepare well enough for this match and it showed. Sayed is world number six and Eid is awkward to play against. I think I’m a good match player - even if I’m not playing well I can still make it difficult for people and that’s what I wanted to do against Sayed. I don’t tend to lose many matches in the fifth and so I had a lot of belief going into the last set that I was going to win. I knew Paul could win that last match so I was really determined to give him the chance to win the tie for us.”

Bayley and Karabardak play their remaining two group matches against Spain and the Czech Republic tomorrow and will hope to win both matches to ensure they top their group.

“It would have been hard to come back from losing against Egypt,” said Karabardak, “so to win it was really good. Spain are a good team but I think we’ve got a good chance and we can win it if we play our best so I’m looking forward to playing them tomorrow.”

Jane Campbell and Sara Head have medalled in every major championship in the women’s class 1-3 team event since 2009, including a memorable bronze in London 2012, but they had a disappointing start to their team campaign with a 3-1 loss to Korea. Campbell lost a tight first singles match to Mi Gyn Lee 7-11 in the fifth and although Head levelled the tie with a 3-1 win over Su Yeon Seo the GB pair lost the doubles 3-1 and the tie when Head lost her singles to Lee 3-1. They can still progress from their group if they beat France and Croatia tomorrow. 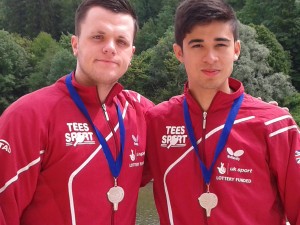 In the men’s class 9-10 event Kim Daybell and Aaron McKibbin acquitted themselves well against the top seeds in their group Poland. Londoner McKibbin is a class eight player and his first match was against the world number one and gold medallist in the class 10 singles Patryk Chojnowski. The tall Pole is an imposing figure and not surprisingly he had too much power and experience for McKibbin in a 3-0 win. Daybell levelled the tie at 1-1 with a 3-1 win over the Polish number two Sebastian Powrozniak and the GB pair played a great match in the doubles, taking the first set 12-10 and then the fourth 11-9 to take the match into a deciding fifth.

The final set was close to 6-6 before the more experienced Polish duo pulled away to take the set 11-6 and the match 3-2. It was then down to Daybell to take on Chojnowski and the 22 year old medical student from Sheffield played really well, defying the world champion with some spectacular defence and stunning forehands and although he lost the match 3-0 the score did not reflect the quality of his performance.