The GB team is assured of at least two medals in the 2014 ITT PTT World Championships in Beijing after Will Bayley and Sue Gilroy reached the semi-final stages of the men’s class 7 and women’s class 4 singles respectively. 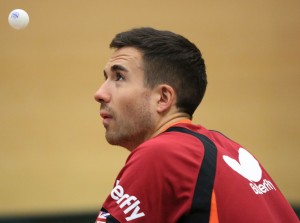 As the winner of his group and one of the top four seeds Sheffield based Bayley received a bye into the quarter finals but was made to work hard by Daniel Horut, who had upset the world number five Stephane Messi in the last 16. Bayley took a 2-0 lead and appeared to be on course for a comfortable win but the Czech player hits the ball with a lot of power and came back to win the third and challenge strongly in the fourth before Bayley asserted himself and took the set 11-5 and the match 3-1.

“He’s got a lot of skills and he’s very difficult,” admitted Bayley, “and when I went 2-0 up I maybe took my foot off the gas a little bit. He got me a bit worried in the fourth set but I stayed calm and knew that if I could find any sort of rhythm I could win the match. One of my targets was to take two medals here - there’s one in the bag now so I can relax and play my own table tennis. I really want to win one of these tournaments - a Worlds or a Paralympic Games - then you can say you are the best in the world and that is what I’ve always wanted.”

Bayley now plays Mykhaylo Popov in the semi-finals tomorrow morning in a repeat of the European final last year that the Ukrainian won and if successful will then play the winner of the other semi-final between world number one Maksym Nikolenko from Ukraine and the Dutchman Jean-Paul Montanus for the world title. o received a bye into the quarter finals and came through a tough match against Wijittra Jaion from Thailand 3-1. The former Commonwealth champion from Barnsley had to dig deep after Jaion levelled the match at 1-1 but Gilroy used all her experience to take the next two sets and assure herself of a second World championship medal having taken bronze in 2006.

“It was a really tough match,” she said. “I’ve never played her before and I wanted that one so much. I’ve worked so hard for the last two years and I’ve played so well this year and this is the pinnacle - competing in Beijing and to get to a semi-final against (world number one) Peric-Rankovic. She has beaten me so many times and I really just want to have another go at her and hopefully win this time. I can relax now and play my game.” London 2012 bronze medalist Jane Campbell is through to the quarter finals of the women’s class 3 singles tomorrow after a great 3-0 win against the world number six Michela Brunelli.

“It didn’t feel easy at any point but obviously I’m delighted,” said Campbell. “I’m maybe playing with a little more belief than usual but it is a rational belief. I can’t reveal what my coach Greg (Baker) said to me when he called a time out at 4-4 in the third set- it is the magic words! - but it helped me regroup and gave me back that belief.”

Campbell now plays the Chinese number two seed Li Qian tomorrow and is looking forward to the challenge. “I just need to play with the same belief - she’s been beaten before and I don’t see why it can’t be me that beats her next.”

Campbell’s class 3 team partner Sara Head came agonisingly close to joining her in the quarter-finals, fighting back from 9-3 down in the deciding fifth set against the Frenchwoman Fanny Bertrand to lead 11-10 but could not convert the match point and lost 13-11.

“I’m pleased with the way I fought back and I’m pleased with my performance but obviously that is tinged with disappointment that I lost,” said Head. “She is very tough and we’ve had many battles. I’m looking forward to the team competition now and I’ll be cheering on Jane tomorrow.”

In the men’s class 10 event Sheffield’s Kim Daybell reached the quarter finals and took the first set against the reigning world champion Yang Ge before the Chinese number one found his range and ran out a 3-1 winner. “I think I surprised him at first with the level I was playing,” said Daybell. “I was catching him out with different kind of shots and making it awkward for him and then I think he just picked his level up and that is why he is such a successful player. Overall it’s been promising - I’ve had some good wins and hopefully the team event will be good as well.”

In the morning Daybell had made sure of going through to the last 16 as the winner of his group by beating Abdelrahman Abdelwahab. After losing the first set the Egyptian edged the second 12-10 but Daybell raised his level to take the next two sets 3 and 4 and the match 3-1. He then produced a great performance in his last 16 match to record a 3-1 win over Jorge Cardona, the Spaniard who had beaten him in Slovenia in May and in the quarter finals of the European Championships last year.

“It was playing on my mind that he beat me in the quarter final in the Worlds four years ago as well,” said Daybell, “so he is obviously someone I find difficult to play and it was nice to put some ghosts to rest and come out on top this time. I think I was a lot more positive than I had been in the past - I went in with a more positive attitude, played more positive table tennis and it paid off.” In the men’s class 8 event Aaron McKibbin lost a close last 16 match against Churen Sun, the Chinese player who had beaten him in the group stages of London 2012. Although he came back from 2-0 down to win the third set and had a point to win the fourth he could not convert it and went down 3-1. Nevertheless it was a good performance from the 22 year old Sheffield based Londoner and he can look forward to playing in the class 9-10 team event with Daybell later in the week.

“I’m disappointed in the result obviously but I thought I played well,” said McKibbin. “He beat me easily in London but I feel like here today in this singles event, in my first Worlds, I’ve given a good account of myself. So I can go away positive that everything is going in the right direction. I believe in the way I’m playing now I feel like it won’t be long until my level will be up there and I can use that confidence in the team event.”

McKibbin had earlier shown great character and determination to fight back from 2-0 down against the tall and powerful Marcin Skryznecki and book his place in the last 16 with a 3-2 win, the first time he has beaten the Polish player.

“I was struggling and playing quite passively,” said McKibbin, “and I felt really nervous but once I clawed that third set back it relaxed me and I had the momentum. I’ve been in that situation a lot of times and I knew that I had to stick to my game plan and kept telling myself to at least try and play positive and make him beat me rather than lose it myself.”

Jack Hunter-Spivey can also be proud of his performance at his first World championships, despite losing in the last 16 to Kiyoung Kim 3-1. The 19 year old from Liverpool fought hard all the way and had his chances but the greater experience of the Korean told in the key points. “I played OK,” said Hunter-Spivey. “I think I’ve played better but in this environment in my first World Championships I’ve had a good performance as a whole and I think I’ve learnt a lot from it as well. The big goal for me is Rio and that is going to involve a different culture, flying outside Europe and getting used to that and playing in these big pressure environments is really good for me. The results may not have gone my way but hopefully I’ve done myself justice and it’s been a positive tournament for me.”

Hunter-Spivey had reached the last 16 with a 3-0 win in the morning against Alexay Eremenko from Israel. It was a great win for the 19 year old, who started well and showed no sign of the nerves that were evident in his first match yesterday.

“Getting off to a good start was massive for me,” he acknowledged. “I think I learned a lot from yesterday being so nervous in my first match; I relaxed today and played some good table tennis - not my best but I played well enough to win which is the main thing.”

Paul Karabardak was disappointed not to progress to the knockout stages in the men’s class 7 singles after losing his second group match to Daniel Horut of the Czech Republic 3-1 and he must now focus on the team event in which he will partner Will Bayley.

“I think I could have played better,” said Karabardak, “maybe not been as nervous and played with a bit more self-belief. It is disappointing because I felt that was a match I was more than capable of winning but I played better than yesterday so hopefully I can improve again for the team event.”