The GB team is assured of at least three medals in the team events at the Slovakian Open in Bratislava with Will Bayley and Paul Karabardak (men’s class 7), Paul Davies and Rob Davies (men’s class 1) and Aaron McKibbin with Belgian partner Marc Ledoux (men’s class 8) all through to the semi-finals tomorrow. Dave Wetherill and Swiss partner Valentin Kneuss (men’s class 6) and Sara Head and Jane Campbell (women’s class 1-3) are also still in with a chance of a medal in their round robin format events. Bayley and Karabardak had to wait for more than an hour to play their match against Israel but eventually got underway with Karabardak against Samuel Shur. The Swansea player had shown great resolution in beating Masachika Inoue from Japan yesterday and once again he held his nerve to beat Shur 11-2 in the fifth after the Israeli had levelled at 2-2. Bayley then beat Daniel Bobrov 3-0 and combined with Karabardak to win the doubles 3-0 and complete a 3-0 win for GB.

“Shur and Bobrov are tough players and are both big fighters,” said Sheffield based Bayley. “They fight for every single point so it is not easy to play them. Shur with his style is very hard so it was a great win for Paul. I’m playing really well and we played good in the doubles but we’ll see. Tomorrow is going to be a real challenge - we will probably play China in the semi-finals and I can’t wait to play them.”

Karabardak was pleased to come through his second five set match against a difficult opponent.

“I think it is tough because I always used to beat him (Shur) when I was younger,” he said, “but he’s won the last four times so I just tried to stay relaxed because I know I can beat him. I just tried to relax, play my game and not get frustrated. It is good because I lost to the Japanese player last time I played him in San Diego when I was playing really well so it must mean I’m playing quite well because I beat him here.”

Rob Davies and Paul Davies came from 0-1 down to win their first match of the day against a combined Argentina/Russia team 3-1, Paul Davies fighting as hard as ever in a 2-3 loss to the Argentinian Fernando Eberhardt. Rob Davies then beat the Russian Dmitry Lavrov 3-0 and the Welsh duo won the doubles 3-0 before Rob Davies showed some of his best form in beating Eberhardt 3-0.

In their second and final group match Davies and Davies took on GB Pathway Squad member and fellow Welshman Thomas Matthews and his Slovakian partner Martin Barbierik. Paul Davies used all his experience to beat Matthews 3-0 and after Rob Davies had beaten Barbierik 3-0 the European champions won the doubles 3-0 to progress through to the semi-finals.

“I wasn’t playing my best against Eberhardt,” said Paul Davies. “It’s been a long couple of days but no excuses - he played better than me. Hopefully we will have two big matches tomorrow that we really could do with winning. We’ll give it our all tomorrow.”

“I’m pleased with how I’ve bounced back,” said Rob Davies, who was disappointed to lose to Frenchman Jean-Francois Ducay in the singles yesterday. “I played a lot better in my singles today which is what I wanted to do. Really happy with the way I played today and just need to keep it going tomorrow.”

Matthews and Barbierik had earlier lost 3-0 to Brazil, Matthews losing a close match to Bruno De Paulo 7-11 in the fifth having fought back to win the fourth 14-12. The former mountain bike rider from Aberdare is clearly benefiting from the experience of another factor 40 tournament.

“I’m working on my emotions,” he said. “Before when I was playing I was getting worked up every point and losing six or seven points just from being worked up. I’ve learnt to work on that today so I’m quite happy. Obviously in very close matches experienced players come through but I’m coming along quite well.” 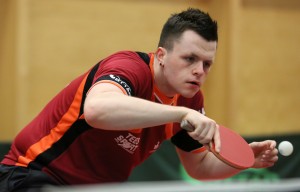 Sheffield based Londoner Aaron McKibbin and Marc Ledoux lost their first group match to Sweden 3-1 but progressed to a quarter final against Brazil with a 3-0 win against Japan. McKibbin showed great character to come back from 2-1 down against the Brazilian number one Israel Stroh to win the first singles 11-9 in the fifth and after Ledoux had beaten Paulo Salmin the GB/Belgian duo recovered from losing the first set to win the doubles 3-1 and secure their place in the semi-finals.

Although he did not progress to the knockout stages in men’s class 9 with his Brazilian partner Erik Higa one of the highlights for the GB team was provided by Ashley Facey Thompson, who enjoyed the best win of his career against Juan Bautista Perez from Spain. The London teenager came back from 2-0 down and 0-4 in the final set to beat the world number six 11-6 in the fifth to level the match against Spain/Hungary at 1-1 after Higa had lost to world number nine Dezso Bereczki from Hungary. Facey Thompson produced another determined performance against Bereczki, holding match points but just losing out to the experienced Hungarian 11-13 in the fifth. “That was the best win of my career - not just because of who he (Perez) is but because of the way I played,” said the Sheffield based 19 year old, who also had a very good win earlier in the day against the Polish number one Pawel Konstantyn, recovering from the loss of two match points in the fourth set to win 11-5 in the fifth. “I still believed in myself even at 2-0 down which is a different Ashley for me because before if I was 2-0 down my head would probably have dropped. But this time I pulled myself up and played my table tennis and I’m really happy with my performance.”

In the round robin women’s 1-3 class team event Jane Campbell and Sara Head began the day with a 3-0 win against a combined Italy/Brazilian team and were then involved in a great battle with Italy, the team they beat to win bronze medal in London 2012. After Campbell lost 9-11 in the fifth to Michela Brunelli, Head levelled the match with a win against Federica Cudia 11-9 in the fifth. The Italians took the doubles 3-1 and the match 3-1 when Head lost another tight match with Brunelli 9-11 in the fifth.

The men’s class 6 team event is also being played in a round robin format and David Wetherill with Swiss partner Valentin Kneuss recorded their second win from two matches with a 3-0 win over Argentina/USA.

Detailed results are available from http://www.ipttc.org/upload/results/files/