Waterman, the class 10 National champion from Bristol, fought back from 2-0 down in his singles final against Krisztian Gardos to level at 2-2 but had to settle for silver after the Austrian took the deciding set 11-4. Waterman and Thomas, from Cardiff, earned their team silver medal with wins over fellow GB player Craig Allen and his Portugese partner Decio Dinis Da Silva, Chile and a Spanish/Chilean combination but lost out on the gold after a 3-1 loss to Gardos and the Russian Ivan Karpov. 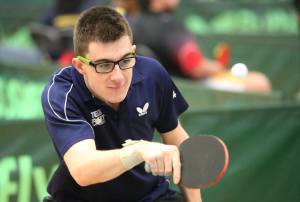 GB Pathway player Bullen, from St Neots, registered wins over the American Eric Pattison and the Spaniard Jorge Benavente in his round-robin singles to win his first international medal.

“It has been a good tournament for me,” said Bullen. “It’s probably been the best I’ve played - I’ve had some good wins and continued to improve as the tournament went on, especially against the number two seed from Spain. After losing to him comfortably 3-0 I played him the next day and was much stronger and more focused in losing in four close sets. I’m now looking forward to Romania next week.”