Paisley table tennis star Martin Perry is heading to Slovenia next week with the British team to compete in his first international tournament since his promotion to the British Para Table Tennis Team Performance Squad. 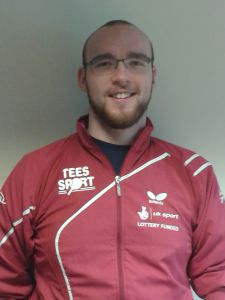 The 22 year old, who won the class 6 title at the BPTT National Championships earlier this month, was introduced to table tennis in 2011 by Terry McLernon MBE at Drumchapel TT Club and joined the British Pathway Squad in 2013. He has made great progress since moving to Sheffield 18 months ago to train full time with the British team, winning the US Open in December last year and taking bronze in the Italian Open last month – his first singles medal in a factor 40 tournament.

“It was a great feeling to get to the semi-finals in Italy and I had good wins along the way,” he said. “I’m looking forward to Slovenia because I love the tournament and I’ve got the opportunity again to beat players who are ranked above me and I want to prove to myself more than anyone else that I am a top player and can maintain a high level of form.

“It is great to say that you are part of the Performance Squad but I don’t think it feels any different because I have been training with the squad for the past 18 months now so it is more of an official title than anything else. I feel that I have been working as hard as I should be every day and working in the right way to improve and that has shown in my results and my world ranking. “Training in Sheffield over the last 18 months is one of the key factors that has helped me improve so quickly. I’ve always trained hard and I think that is one of my key qualities as a player but training hard and winning matches is different so the experience of the players and the coaches in Sheffield has helped me to learn how to grind out matches when you are maybe not feeling your best, which we all have to do. My game technically has improved in leaps and bounds since training here and that is to be expected because training day in and day out with World, Paralympic and European champions I’d be ashamed of myself if I didn’t improve.”