Davies came through his semi-final against the young Italian Federico Falco 3-0 but could not find his game against the more experienced Italian Andrea Borgato who has been in great form at this tournament. The world number nine took the first two sets comfortably and although Davies fought back in the third the Italian edged it 12-10 to take the gold.

“He (Borgato) played really well to be fair,” said Davies. “He had really good touch and I wasn’t really at the races and that was the difference at the end of the day. I wasn’t that confident coming in here so I’m more than happy with getting to the final. Disappointed with the final match but I know I am going to come back stronger ready for my next competition in Germany and my main target is the Europeans in September so that is what I am heading for and that is where I want to be winning the tournament.” McKibbin showed all his character to battle his way to the final, first against the talented 18 year old Russian Artem Iakovlev in the quarter-final, coming from 2-1 down to win the match 11-8 in the fifth and again in the semi-final when he fought back from 2-0 down against Mathieu Loicq from Belgium to beat the former World and Paralympic champion 11-9 in the fifth. Although he lost the final to the World champion and World number one Viktor Didukh 3-0 he had his chances in the first two sets and can be proud of his efforts here.

“I came in with more of a game plan this time,” said McKibbin. “I played him (Didukh) in Italy and played really well and got destroyed. This time I didn’t play as well but tactically I was a lot better and I could feel that he was a bit nervous because I’ve shown some good form in the singles here. I can’t be disappointed – I’ve reached the final and it is something to build on. Loicq has had good wins here and beat Csonka who was the silver medallist in Rio so he is in good form. I’ve had a few five set matches at this tournament and felt in control the whole way through so even when I was 2-0 down I believed in myself that I could do it so I was happy to get the result.” 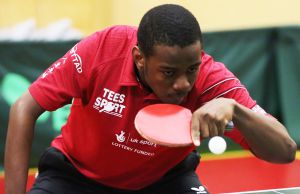 In his quarter-final Facey Thompson took on Pawel Konstantyn from Poland, who had surprisingly beaten the number one seed and World number four Juan Perez Gonzalez in yesterday’s men’s class 9 group matches. The London South Bank University student looked to be heading for defeat at 2-1 and 4-6 down but he rallied superbly to win the set 11-8 and went on to take the match 11-8 in the fifth. He reached the final with a 3-0 win over the 16 year old Ukrainian Lev Kats before finding the experienced Iurii Nozdrunov in top form in the final, the Russian former World number two taking the match 12-10 in the third.

“I gave him too much respect,” said Facey Thompson. “He’s got big shots but by the third set I knew what to do against him but it was too late. It was a good match but I’ve got room for improvement. To get to the final gives me a lot of confidence in my game and there are things to improve when I am training full time. I’ve had to fight a lot this week – as I’m not playing that much at the moment I had to fight against myself as much as anyone else because I feel I can be better ability-wise but I haven’t been training as much so it has been hard. I’m looking forward to my next competition in Germany and finishing Uni so I can just focus on table tennis and see what happens.” After winning his quarter-final against Daniel Horut from the Czech Republic 3-1 Bayley came up against the former European champion Mykhaylo Popov. The two have had some great battles in the past and it was the Ukrainian who proved just the stronger today in a 3-2 win, 11-9 in the fifth.

“He played really well and it is difficult for me,” said Bayley, “because he really attacks hard and strong. Today he probably deserved to win but it was a good battle and I’ll be back stronger next time. I’ve been working on my fitness because this is my first tournament after Rio and I just wanted to get some match practice in as I haven’t played many matches. I knew that my level wasn’t what it is at major championships so I’ve just got to keep going now – I’ll play the German Open and get some more match practice under my belt and by the Europeans I’ll be ready to do as well as I can.”

Hunter-Spivey saved three match points in the fourth set of his quarter-final against Hamza Caliskan and finally beat the Turkish player 11-8 in the fifth to set up a semi-final against his team partner Tommy Urhaug. The Norwegian former Paralympic champion was always in control in a 3-0 win and the 21 year old from Liverpool had to be content with the bronze medal. “We’ve trained a lot together,” said Hunter-Spivey, “and we are good friends so it is always sporting when we play and today he was just too good. I feel that I am at a level now where I can compete with him. I’ve not played much table tennis in the off-season as I’ve been working on my fitness so now I’m getting into a more technical period and I feel that I am definitely improving and I’m quite positive after the singles. I kept my mentality and my composure when I was in an under pressure situation and I managed to come out on top so I feel that I have played a good level today because he was playing well. There are some top players here – to get a medal in any factor 40 competition is very good so I’m looking forward to the team competition now to see where my level is at.” Wetherill dropped the first set in his quarter-final against Pavao Jozic but came back to beat the Croatian 3-1. He was forced to retire with a knee injury when 2-1 down to the World champion Alvaro Valera in their semi-final but is hoping to recover in time for the World Team Championships in Slovakia later this month.

“It’s never nice having to pull out with an injury,” said Wetherill, “and it is frustrating but I’ve been pleased with how I’ve ground out results here. Under the circumstances I feel that I have played really well so I can take positives from that.” Paralympic team bronze medallist Ross Wilson pushed Didukh all the way in their quarter-final and led 2-1 before the Ukrainian used all his guile and experience to take the last two sets. The 21 year old from Minster is a great talent and still a work in progress and he can take confidence from the way he played against the player who has dominated men’s class 8 for the past four years.

“I think matches like that can go either way,” said Wilson. “At 2-1 up and 7-7 in the fourth that was obviously a great chance but he is a clever player and that is what the best do - they figure out a way to win. Hopefully I can think about how he has done that and match him next time. Obviously he is a great player and it is good to know that I am competing with him but I want to get those wins now and I’m looking forward to starting to beat him.” 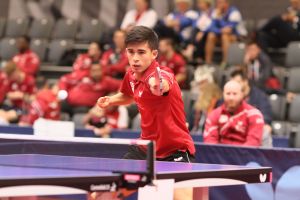 Kim Daybell also came agonisingly close to winning his quarter-final against the former World and Paralympic champion from the Czech Republic Ivan Karabec. The two have had some great battles in the past and although Daybell fought back from 2-0 down to level at 2-2 it was the Czech player who edged the deciding set 11-9.

“It was one of those games,” said the 24 year old who has resumed his medical studies at Leeds University since the Paralympic Games in Rio. “It is always close when we play but he played well. I made four or five mistakes that I wouldn’t normally make and that was the difference today.” Megan Shackleton’s reward for her first win against a top 10 player yesterday was a quarter-final against the World number one and Paralympic champion Borislava Peric-Rankovic and she was not outplayed despite a 3-0 loss.

“I feel that considering the score I did play well,” said the 18 year old, “and from this tournament I’ve shown that I can compete with the top level players. Peric is Paralympic champion and for me to be edging so close to winning sets and putting her under pressure it shows the improvement I’ve made since last season. The thing for me is managing my nerves. In the past I’ve built these players up to be unbeatable but I’m training full time now and getting experience and from my win yesterday I feel that I am ready to compete with these players.”

Sue Gilroy lost her bronze medal match in Rio to Nada Matic and the Serbian was too strong again today in their women’s class 4-5 quarter-final taking the match 3-0 as Gilroy struggled to find her game.