Paul Davies and Tom Matthews took silver in the men’s class 1 team event on the last day of competition at the PTT Slovenia Open today and there were bronze medals for Aaron McKibbin and Ross Wilson (men’s class 8), Will Bayley and Billy Shilton (men’s class 8), Sue Gilroy and Megan Shackleton (women’s class 4-5) and Jack Hunter-Spivey with his Norwegian partner Tommy Urhaug (men’s class 5).

With the World Team Championships taking place next week in Slovakia the team competition here has taken on additional significance and there were promising signs for the British team against some of the top teams in the world.

With two wins from three matches in the round-robin men’s class 1 event Davies and his fellow Welshman Matthews needed to win their final match against Italy to be sure of a medal. Playing together for the first time at this tournament they lost the doubles 3-0 to the experienced Italian pair of Andrea Borgato and Federico Falco but Davies levelled the tie with a great win against Borgato – edging a tense first set 14-12 and going on to beat the Italian, who had won gold in the singles here, 3-1. That left Matthews needing to beat Falco in the deciding singles and the 24 year old from Aberdare showed his improvement by taking a 2-0 lead and holding his nerve superbly to take the match 11-7 in the fourth after Falco had threatened to take the match into a decider.

With both Britain and Hungary/France finishing with three wins from four the gold was decided on the result between the two teams and it was the Hungarian/French partnership of Endre Major and Alan Papirer who took the gold, having beaten Davies and Matthews 2-0 yesterday. “At the end of the day it was our first tournament together so our doubles can only improve,” said Davies, who had revived memories of his bronze medal in London 2012 with a gutsy 3-2 win against the Russian Dmitry Lavrov yesterday. “I could have done better with the shorter balls but we’ve had the result we really wanted against Italy to take on to the World Championships. For me it is a cracking result and the young lad did the business to get the final win. This has given me a lot of confidence because I’ve only lost one singles match here and to beat Borgato in the singles and to take him again here in the team is great – I’m buzzing now.”

“I’m proud that I kept my composure,” said Matthews. “I didn’t get angry with myself and went with the flow when he was winning points and just composed myself for the next point. Paul played really well beating Borgato, which was a massive win, and it is great to beat the Italians. I’m looking forward to the World Teams now and this is going to give us a lot of confidence. This is the first time we have played together so we’ll work on our doubles – it has got better throughout the tournament and there is better to come.”

Bayley and Shilton took on the Paralympic silver medallists Sweden and competed well in the doubles despite a 3-0 loss. Bayley fought as hard as ever against Emil Andersson, but the class 8 former World number one and European champion had just too much power and won in three close sets to take Sweden into the final. 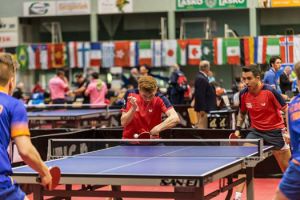 “It didn’t go our way today,” reflected Bayley, “but we can learn a lot and we have to take the positives out of it. I think I’m better than some of the performances I’ve put it in here. I was playing against high quality players who have won medals at major championships and I was playing out of my class in the team event but I know on my day I can play better than that. But I have to give respect to my opponent today who played really well. I always want to peak for the majors so I want to win these matches I really do but I’m in a transitional phase in my training and just trying to adapt my game so I’m ready for the European Championships in September.”

“Playing with someone like Will is always great experience,” said 18 year old Shilton, who will join McKibbin and Wilson in the class 8 event at the World Team Championships. “He is Paralympic champion and lives for the big matches so I’m disappointed to lose but we played a good match and on to the next one now. Being in this whole environment and experiencing the team spirit is really good for me. I’m happy to get a medal and looking forward to the World Teams now.” 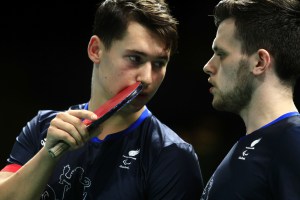 McKibbin and Wilson had an even tougher semi-final against Ukraine, the Paralympic champions who had beaten them in the semi-final in Rio. The young British pair showed improved form in the doubles and at 2-1 down were right in the match before Ukraine pulled away in the fourth for a 3-1 win. Wilson had pushed Didukh to five sets in the quarter-finals of the singles but could not quite find that form today and the Ukrainian World champion and World number one was at his best to take the first singles 3-0 and win the tie for Ukraine.

“We had a really good start,” said McKibbin. “I think that is the first time we have taken a set against them and felt really in the match so we can take great confidence from that going into the Worlds. The fourth set got away from us a little bit, they grew in confidence and we found it hard from there. If we could have nicked the third set it could have been a different story. Personally I feel really confident going into the World Team Championships now – taking medals in the singles and team is a big boost for me so hopefully I can go on from here.”

“I think we let it go from 2-2 in the fourth,” agreed Wilson. “But we did our best and I think we have shown ourselves that we can compete with them so going into competitions like the World Teams and the Europeans later this year it is a positive thing for us. It hasn’t been a bad tournament for me but I want more and I’m hungry for more and I’ll be looking for better at the next tournament.”

Paralympic champion and World number one Borislava Peric-Rankovic and Paralympic bronze medallist and World five Nada Matic from Serbia are a formidable team and they had too much combined experience for Gilroy and 18 year old Shackleton in their semi-final. After a 3-0 win in the doubles Peric-Rankovic took on Gilroy in the first singles. The two have had some great battles in the past but the Serbian was too strong for Gilroy today in a 3-0 win. 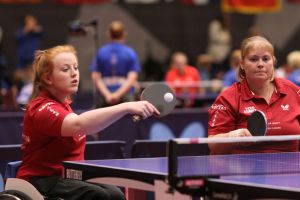 “We are a work in progress in the doubles,” said Gilroy, “but we haven’t played together for a year so from the start of this tournament we have started to be better at communicating and rallying a lot more than we were. We were trying to win the points too soon yesterday but it is coming together a lot better so hopefully in future we can do really well as a team. My training has been going OK but I’m disappointed with my singles game here because things I can do in training I don’t do in a match so I need to improve.”

“We are consistently getting better and better as a team,” said Shackleton. “We are competing against these players now and we can look to improve on our performance here in the World Teams and I am sure we can do that. I’m really happy with how I’ve played in this tournament and I can see huge improvement from last year. I feel a more confident player and that I can really push these top players now. I’ve had a top 10 win and for me that shows the improvement overall.”

Hunter-Spivey and Urhaug took on Serbia, the Paralympic bronze medallists in their semi-final and lost a competitive doubles in four sets. Hunter-Spivey had lost his last two matches against Mitar Palikuca in three sets and although he put up a great fight today the World championship bronze medallist just had the edge in a 3-2 win. “I think I played well overall,” said Hunter-Spivey. “He changed his tactics the last few times I’ve played him and I’ve lost 3-0. But I feel my weight loss over the winter has helped my movement around the table and I’m thinking really positively in my matches so there are a lot of positives to take. It’s always frustrating to lose in the fifth but I love being in a battle - this time I didn’t win but next time hopefully I will. Overall I think I have played great in this tournament; I’ve worked a lot with the team psychologist and that is going well so I can only improve from here.”