Sunday, September 7: The Chinese Centre for Disability Sport is shrouded in mist and there is a hint of rain in the air but it is still very warm as we head over to the hall after breakfast. 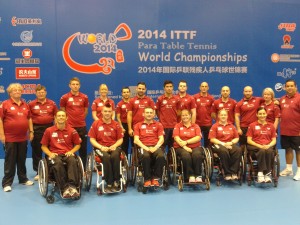 Everyone has remembered to wear their red competition shirts and track suits for a team photo, which we take in the basketball hall where the TV court has been set up. In contrast to the competition hall which has 14 tables, this court has only one table and a very different atmosphere - similar to Centre Court at Wimbledon compared to one of the outside courts. Empty it feels eerily quiet and when play gets underway with hopefully packed stands there are sure to be some players who will enjoy being the sole focus of attention more than others.

It is really starting to feel like a World Championships now and with no scheduled practice sessions and more than 300 players it is a case of waiting for some tables to become free in one of the three halls to get an hour’s practice.

Racket testing is available and all the GB players get their rackets checked to make sure they are legal. This is a voluntary process today but once competition starts everyone’s racket will be checked before every match.

There are now two dining halls in use to accommodate everyone and outside on the athletics track preparations are underway for the Opening Ceremony.

At 14.00 Gorazd and Greg attend the technical meeting where they are given the draw for the singles. The players are given the option of training in the afternoon and some head to the hall for service practice while others decide to rest. At 16.30 we all congregate in the reception area on the floor of our accommodation block for a team meeting. Greg confirms the draw for all the players and timings for the matches tomorrow.

First off for GB will be Sue against Piyawan Thinjun from Thailand at 10.10 followed by Aaron at 10.50 who has a tough first match against the Ukrainian world number one Viktor Didukh. All the GB players are in groups of three with two to progress to the knockout stages; Rob, Will and Sue will play twice tomorrow. There is an air of excitement now and a few nerves as well as we now have matches and opponents to focus on. 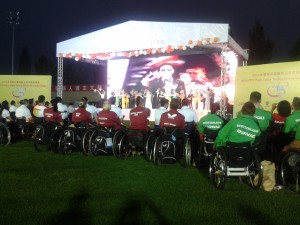 At 17.30 we head over to the athletics track where a stage has been erected and rows of seats laid out for the Opening Ceremony. The organisers have arranged a great show with the obligatory speeches kept short and the majority of the ceremony devoted to a series of inspirational performances from the Chinese Disabled Performing Arts Troupe featuring visually impaired musicians and hearing impaired dancers. Watching Strictly Come Dancing will never be quite the same again as celebrities merely try to overcome a lack of rhythm and a fear of sequins.

(Further information on the 2014 ITTF PTT World Championships is available at http://www.2014pttwc.org.cn/)