Tuesday, September 9: It’s another lovely day in Beijing and as we arrive at the hall preparations are being made for the start of the day’s play. Music is playing in the competition hall and the warm-up hall is full of athletes practicing, including Kim and Aaron. Jack is in the call area and at 09.25 the music gives way to a fanfare and he enters the competition hall with the rest of the athletes for the first matches. He looks focused and determined and we give him a cheer as he comes past. 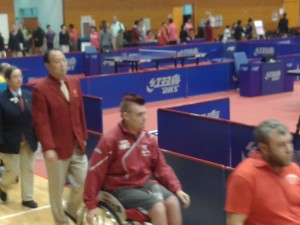 Jack enters the hall for his first match of the day

The Swedes are once again threatening our territory and the seating is starting to fill up. Jack is playing Eremenko from Israel for a place in the knockout stages and gets off to a great start, winning the first set 11-4. The second set is much closer but Jack edges it 12-10 and he races into a 6-1 lead in the third. At 6-4 Gorazd calls a time out to steady the ship; Jack goes on to take the set 11-7 and with a clench of his fist he’s safely through to the last 16 - a great achievement for him in his first World Championship.

Next up is Kim against Abdelwahab. He too makes a good start but the diminutive Egyptian pegs him back and Kim wins a tight first set 12-10. The second set is also close and the Egyptian takes it 11-9 to level at 1-1. It’s an important match for Kim to win as a loss would leave the group to be decided on count-back and he races into a 7-0 lead in the third before taking it 11-3. He quickly takes a 6-2 lead in the fourth set; a forehand winner gives him a 10-3 advantage and he clinches the match on his second match point. Job done for Kim as he will go through to the last 16 as the winner of his group.

“I wasn’t too worried at 1-1,” he says, “I knew what I needed to do to turn it around which was to move my feet and be positive and just try and overpower him really.” Sounds easy enough but we’re all relieved he managed to actually do it.

It’s two from two so far and Aaron now has a must win match against Marcin Skrzynecki if he is going to go through to the last 16. The Pole is ranked one place above Aaron and it will be a tough match for him. The Belgians have moved in to ‘our’ seating to support two of their players and there are cries of “Allez Ledoux!”

Skrzynecki is an imposing figure and a head taller than Aaron and he takes the first set 11-7 and then the second 11-6. It’s not looking good but in the third Aaron takes the lead at 5-4 and although his opponent levels at 6-6 Aaron holds his nerve and takes the set 11-7. In the fourth set from 3-3 Aaron manages to keep his head in front; a spectacular smash which bounces high over Skrzynecki’s head takes him to 10-7 and he takes the set 11-7 to level the match at 2-2.

Final set and winner takes all. Aaron takes a 4-0 lead and although Skryznecki pulls it back to 4-3 Aaron again manages to keep at least a point in front and there is a shout of frustration from his opponent as an error gives Aaron three match points. He only needs one and punches the air as he completes a great fight back and books his place in the last 16.

The draw is out for the men’s class 5 last 16 and Jack is to play Kiyoung Kim from Korea this afternoon. With only three matches in play there is a roar from those watching the men’s class 6 contest between Eid (EGY) and Alecci (ITA) as the Egyptian plays two shots flat on his back on the floor and wins the rally when his opponent nets his attempted smash. Sadly for him it is not enough and the Italian shouts in triumph as he takes the match 3-2.

Our final match of the morning is the last group match and Paul is playing Daniel Horut. With our nerves already stretched we hope that he can produce his best and get the win he needs to progress from the group.

The first set goes to the Czech 11-8 but Paul fights back to take a 10-7 lead in the second. At 10-9 Matt calls a time-out and the tactic works as Paul takes the set 11-9. It is close in the third until a couple of edges gives the lead to Horut and he capitalises to take the set 11-6. Paul takes a 4-2 lead in the fourth but Horut is playing well and forcing errors from Paul who is soon facing five match points. He saves two but can’t stop Horut from clinching the match 3-1. It is very disappointing for Paul, who will now have to pick himself up and focus on the team competition later in the week.

The draw has been done for the men’s class 8 and men’s class 10 last 16 round and Aaron is to play Churen Sun from China and Kim will play the Spaniard Jorge Cardona, who beat him at the quarter-final stage in the Europeans last year and the World Championships four years ago. Both matches are scheduled for 15.45.

There is a break for lunch before the afternoon session begins. At 14.20 we are back in the hall for the crucial second group matches in the women’s class 3 event. Both Sara and Jane need to win to go through to the last 16 and both face awkward opponents. We have moved to the seating by the wheelchair courts and it soon becomes apparent that we have strayed into Chinese Taipei territory. Rob is in the hall to cheer on his team mates

Rob, who has a day off today as the men’s class 1 quarter-finals are tomorrow, has come down to watch and starts a chorus of “Let’s go GB, let’s go!” For the first time since the tournament started a chant of “China!” echoes around the hall.

Jane makes the best start, winning the first set against Dretar-Karic 11-9 while Sara loses a tight first set to Edith Sigala Lopez 13-11. Sara then wins the next two and after a real battle in the fourth she wins the set on her second match point 12-10 to take the match 3-1. Having lost the second set Jane is now 2-1 up on Dretar-Karic and has match point at 10-9 when the Croatian coach calls a time-out. As they return to the table Jane takes her time and later admits that the time out gave her time “to calm down and decide what to do”. She holds her nerve brilliantly to win the point and take the match 3-1. So both our class 3 women are through to the last 16 - a great result.

We barely have time to catch our breath before Jack is back for his last 16 match against Kiyoung Kim. The Korean wins the first set 11-8 and after a very close second set he takes it 14-12 to go 2-0 up. At 1-3 down in the third Gorazd calls a time out; Jack pulls it back to 4-4 and then moves ahead with some great play, shouting in celebration as he wins the set 11-9. In the fourth set Kim moves into a 6-2 lead and although Jack keeps battling a service error at 8-10 down means that his World Championship is over. Although disappointed he can take a lot of positives from his performance here and be proud of the way he’s played.

With Jack’s match over we quickly turn our attention to Kim and Aaron, whose last 16 matches have just started. They are on opposite sides of the hall which makes watching both difficult. Kim makes a flying start against Cardona - a player who has proved to be something of a nemesis for him - and takes the first set 11-3. Meanwhile Aaron loses a tight first set 14-12 to Sun, the Chinese player who beat him in London 2012.

Cardona takes the second set 14-12 to level against Kim and Aaron goes 2-0 down after losing the second set 11-8. Kim is full of energy as he almost dances around the table and he takes the third set 11-3 while Aaron is fighting back against Sun and takes the third set 11-8. In the fourth set Kim recovers from 2-5 to 6-6 and the Spanish coach calls a time-out but it turns out to be to Kim’s advantage as he takes the set 11-9 and wins the match 3-1. It’s a really good win for him and he’s through to the quarter finals this evening.

Aaron is neck and neck with Sun in the fourth set and has a point to win it at 10-9 but the experience of the Chinese player proves too much and Sun takes the set 12-10 and the match 3-1. Aaron is disappointed with the result but pleased with the way he is playing and he can take confidence from that into the team competition when he will partner Kim in the class 9-10 event.

With no more GB matches for a while we can take a welcome break but Will stays in the hall to watch the last 16 match in the men’s class 7 event between Daniel Horut and the Stephane Messi as he will play the winner in the quarter finals this evening.

At 17.55 Jane and Sara are back in the hall - Sara to take on Fanny Bertrand from France and Jane to play the Italian Michela Brunelli. Both win the first set and Jane then takes the second 12-10 while Bertrand levels her match with Sara at 1-1 and then takes the third 11-4 to take a 2-1 lead. Jane is 4-1 up in the third when the Italian coach calls a time out and Brunelli levels at 4-4. Greg then calls a time out for Jane and whatever he says (Jane refuses to say afterwards) works like magic as she takes the next seven points to clinch the set and the match 3-0.

Meanwhile Sara has levelled her match at 2-2 and there are cries of ‘Come on Sara’ from the GB camp and cries of “Allez” from the French. At 9-3 to Bertrand it looks all over for Sara but she fights back to 10-10 and then has a match point but the Frenchwoman is in determined mood and takes the set 13-11 and the match.

There is no time to reflect on such a close contest as Kim and Sue are about to start their quarter-finals. Kim is taking on the reigning world champion from China and makes a great start, taking the first set. But Ge is not giving up his title easily and although Kim tries hard the Chinese number one’s greater experience begins to tell and he takes the match 3-1.

Sue also takes the first set against her Thai opponent Jaion but loses the second 11-13. She establishes a 4-0 lead in the third and takes it 11-8 and then is even more impressive in the fourth, which she wins 11-3 to clinch a 3-1 win, a place in the semi-finals and the first medal for GB. A delighted Sue is assured of at least a bronze medal and will play her old rival Peric-Rankovic tomorrow for a place in the final.

Our attention then turns to Will’s quarter final which is against Horut, who upset the rankings by beating Messi in the last 16. Will makes a good start and wins the first two sets 11-9 and 11-8 but Horut hits the ball very hard and is going for his shots and he takes the third 11-7. At 4-4 in the fourth there are a few nervous shouts of “Come on Will” and he responds by moving ahead and he takes the set 11-5 and the match 3-1.

There is relief all round and we have another medal. What colour will they be? We will find out tomorrow.