Karabardak began the day at 09:00 with a 3-0 win over Domingo Arguello Garcia from Costa Rica which ensured that he topped his group and received a bye into the quarter-finals. A 3-1 win against the Russian Alexander Esaulov was followed by a 3-0 semi-final win against the world number three Hong Kyu Park from Korea to take him into the final against Thomas Rau. The German was in good form having beaten the world number one Alvaro Valera but Karabardak was always in control and took the match and the gold 3-0.

“I managed to scrape through the early matches not playing my best,” said the 29 year old, “but when I hit the semis and finals I started to play my best table tennis which is really pleasing. To win this competition is a big thing because there are only two players in the world who aren’t here so this will give me confidence now looking ahead to Rio.”

Bayley beat the French world number eight Kevin Dourbecker 3-0 in the last 16 and followed that with a 3-0 win over the Belgian Ben Despineux to set up a semi-final against Mykhaylo Popov. The reigning European champion had looked in great form here but Bayley played a superb match and frustrated the imposing Ukrainian in an impressive 3-0 win. That set up a final against the world number one Maksym Nikolenko in a repeat of their World Championship final last September. After dropping the first set Bayley played brilliantly to take the next two but the Ukrainian fought back and after winning a close fourth set he went on to take the fifth and the match 11-4.

Nevetheless it was a good performance by the Sheffield based 27 year old in his first competition of the season.

“I thought I was playing really well and I should have really finished it off,” said Bayley. “You have to take your chances and when it was close in the fourth if I had taken a few points there I would have won the match. But he is a great player and it was a tough match. I actually feel that I am playing better than when I won the world championships - I feel like I’m hitting the ball better and I’m a bit stronger so I’ve got more to come and I’m excited about that.” In the quarter final Davies came back from 1-2 down against world number two Jean-Francois Ducay to beat the Frenchman 11-7 in the fifth and a more comfortable 3-0 win over the Italian Andrea Borgato took him into the final against world number seven Young Dae Joo. Davies started well but the Korean came back to win the next two and when Davies levelled at 2-2 it was down to the final set. The former rugby player from Brecon never gave up and twice came back to level the score but it was the Korean who clinched the gold 12-10 in the fifth.

“I’m reasonably happy with the way I played,” said Davies, who is also competing here for the first time since the World Championships. “Obviously the wrong result for me but my shot selection was what lost if for me at the end. Overall I played really well and it was the first time I’ve played him (Joo) so it was good to see him. I should have some tactics against him next time which will help. Disappointing that I couldn’t win the final but it happens; he played better on the day and hopefully I’ll play better next time I play him.”

Campbell had secured her place in the quarter-finals by beating the American Pamela Fontaine 3-1 and then saved four match points against Helena Dretar-Karic before going on to beat the Croatian 11-6 in the fifth. She played well in the semi-final against Andela Muzinic from Croatia but the world number four was just too strong and took the match 3-0.

“I didn’t feel today I could have played any better,” said Campbell, “and to get a bronze medal in such a competitive event is very satisfying.” A 3-0 win over Carlos Alberto Carbinato Junior from Brazil took Daybell into a quarter final against Mykhailo Trunov from Ukraine and another 3-0 win earned him a semi-final against Jose Manuel Ruiz Reyes. The 22 year old Leeds University medical student had his chances to win in a great match but in the end it was the Spanish world number six - a former World and European champion - who showed his experience in the final set to close out the match 3-2.

“For the first four sets I think I played really well,” said Daybell. “The first set could have gone either way but I think the crucial set was the fourth which he just took. But he is a champion and he knew how to play in the fifth and it was just a shame I couldn’t get over the line. I’ve picked myself up from the start of the tournament - I wasn’t feeling that good or playing that well so I was pleased to come here today and turn it around and play table tennis a bit more to my highest level.” 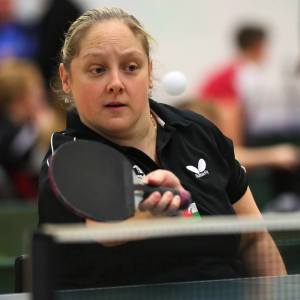 Sara Head had progressed to the knockout stages with a typically determined win over the Mexican Edith Sigala Lopez, fighting back from 1-2 down to take the match 11-8 in the fifth. She then dropped the first two sets in her last 16 match against Nergiz Altintas of Turkey but again fought back magnificently to win the match 11-8 in the fifth before losing her quarter-final against the Italian world number five Michela Brunelli in four close sets.

“To feel my form coming back is enough to make me very happy,” said Head. “I lost in deuces and they could have gone either way so I’m a bit gutted but pretty happy at the same time that my match play is improving. After the lack of training in the winter, to come here and play like that I’m pretty satisfied.”

Ashley Facey Thompson beat the Dutchman Ronald Vijverberg 3-1 in the last 16 of men’s class 9 to set up a quarter final against Juan Bautista Perez Gonzalez. The world number nine from Spain was in top form and took the match 3-0.

“To be honest he was on fire,” admitted Facey Thompson. “I beat him last time and he just knew that he didn’t want to take any chances. He came out strong and it was difficult for me to get into the match. I tried my best but to be fair he was just too good today.”

In men’s class 8 Aaron McKibbin played a great match to beat the former World and Paralympic champion Mathieu Loicq from Belgium 3-1 but could not repeat that performance in his quarter-final against an inform Johanes Urban, losing 0-3 to the German.

“I feel that I played OK,” said McKibbin. “I’m disappointed to lose as I felt I was in control of a lot of the sets but he is very awkward to play and is obviously in good form as he beat Emil (Andersson - world number four) in the last round so I’ve got to take it and move on. I’m happy with how I performed and I felt my level didn’t really drop too much - it was just that I didn’t take my chances.”

Billy Shilton took the first set in his men’s class 7 last 16 match against Ahmed Sayed Moahmed from Egypt but the world number seven had too much experience for the 16 year old and took the next three sets to win the match 3-1.

Martin Perry needed to win his final group match to go through to the knockout stages of men’s class 6 and he made a great start against Danny Bobrov but the world number 12 from Israel fought back to take the match 3-1 and put the Scot out of the competition.