It was a second medal for Hunter-Spivey, who had recorded a first win over his illustrious team partner on the way to winning bronze in the singles.

“Tommy is one of my role models in the sport,” said the 20 year old from Liverpool, “and it’s a massive achievement to beat him especially in Paralympic year. I feel that if I can beat him I can beat anyone so it’s given me a lot of confidence. It’s been a good tournament for me. Now that I don’t have to worry about qualification for Rio I can play with a bit more freedom and play my own game.” 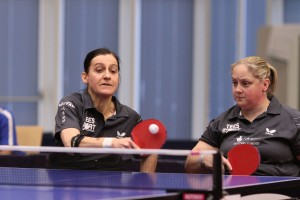 Campbell and Head, bronze medalists in London 2012, started the round-robin women’s class 2-3 team event with a 2-0 win against Serbia and followed that with a 2-0 defeat of Italy. Their final match against Croatia was to decide the gold medal and it was the combination of World number four Andela Muzinic and Helena Dretar who proved stronger in a 2-0 win.

For both players it was a good way to finish the tournament after disappointing results in the singles.

“I was very low after the singles,” admitted Head, “so I was very happy to come back and get silver with Jane in the team event. We were very pleased with the wins against Italy and Serbia and it was such a close game against Croatia - it was 3-2 in the doubles and to get close to them was encouraging. It has given us lots of motivation for the next few months - things we have been working on and will continue to work on.”

“I was pleased with the way I competed in the singles,” said Campbell, “although disappointed to have lost two close matches but I think my level was good. To get silver in the team is a good start to the year. We’ve made a lot of progress in a short space of time so it is good to see that our hard work is paying off.” The men’s class 6 team was played in a round-robin format and after 2-0 wins against GB team mate Martin Perry and his Swiss partner Valentin Kneuss and a combined team from Romania and Croatia, Karabardak and Wetherill faced Denmark in their final match to decide the gold. In a rematch of last year’s European Championship final it was World number two Peter Rosenmeier and Michael Jensen who came out on top again to win the tie 2-0 and take the gold.

“I played well in the singles and had my chances against Rosenmeier but he is a tough player,” said Karabardak. “I don’t think I played my best this week but it is the first competition of the year so I was pleased with the way I played. It’s still early days for us in the team competition and we can take a lot out of this week for the future.” Gilroy and Shackleton recovered from a 2-0 loss against a combined team of class 3 World number one Anna-carin Ahlquist of Sweden and the Russian Aleksandra Vasileva to progress to the semi-finals with 2-0 wins against Indonesia and Turkey. They had to settle for a bronze medal after a 2-0 loss to Thailand.

“The first tournament of the season is always difficult,” said Gilroy. “I played really well in patches and there are certain areas I need to practice a lot more. We had a good match against Chinese Taipei and against Turkey and it was disappointing to lose against Thailand but that is something to work on. To start the season with two medals is a good start and there is a lot of improvement to come.”

“It’s been an up and down week,” said Shackleton, “but we’ve finished on a high which I’m happy about. I’m learning a lot from playing with Sue and watching her when she is playing singles. She is helping me a lot with how to handle pressure situations and I can work a lot on my mental composure against players who are ranked higher than me.”

McKibbin and Wilson started with a 2-0 win over Italy but a 2-0 loss to Sweden left them needing to beat the Ukraine second team to progress. A 2-0 win earned them a semi-final against class 8 World number one Viktor Didukh and class 7 World number two Maksym Nikolenko and the GB pair pushed them all the way but the Ukrainian pair clinched a 2-1 win to take them into the final and went on to take the gold. “I’m really happy because I feel that I have carried on from the form I showed in China last year,” said McKibbin. “I felt confident going into the tournament and I feel I’ve played to a really good level - so there are definitely positives to take into the next few months. Our doubles was much improved although we were a bit disappointed with the way we played in the doubles against Ukraine this time and we feel there are a few parts of our game we can work on to change that but overall we are quite happy with the way things are going. There is a long way to go before Rio but this was definitely a good start.” “It was quite hard to get used to this standard again,” said 20 year old Wilson, who was playing in only his fifth competition since winning a team bronze in London. “It’s the first competition of the season and I think a lot of things in my game were tested but I think that was the main thing I needed because I’ve had a big block of training and I’ve changed a lot of my game over the past few months. So it has made me realise what I need to work on going in to the next competitions and that will be a big help to me for Rio. I’m definitely in a good place.”

Will Bayley and Billy Shilton were drawn in the other group in men’s class 8 and after 2-0 wins against Indonesia and the Netherlands and a 2-0 loss to Ukraine, who had earlier lost to the Netherlands, they were unlucky to lose out on a semi-final place on countback.

In the round-robin men’s class 1 event Thomas Matthews and his Croatian team partner Daniel Lazov beat the Hungarian/Romanian partnership of Endre Major and Alexandru Imbuzan but a 2-1 loss to the Argentinian Fernando Eberhardt and Dmitry Lavrov from Russia left them in second place after Eberhardt and Lavrov beat Major and Imbuzan 2-0 to take the gold, which was the only medal awarded in the class. 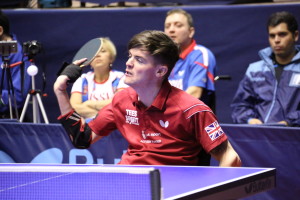 Nevertheless it was a good tournament for the Welshman, who took a bronze in the singles and continues to progress.

“It’s been a bit up and down,” said Matthews, “but I’ve played well for the first tournament of the year. I just wanted to come out and play as well as I did at the end of last season. I was very pleased to beat Major as I usually struggle against him and he is a really good player. I had a few dips during the tournament but I’ll work on that and come back stronger for the next tournament in Slovenia.”

Kim Daybell and Ashley Facey Thompson reached the quarter-finals of men’s class 9-10 with a 2-0 win over Russia/Serbia after losing their opening match to the very strong combination of Dutchman Bas Hergelink and 15 year old Filip Radovic from Montenegro, gold medalist in the men’s class 10 singles earlier in the week. They faced Hungary in the quarter-finals but in a close match eventually lost out 2-1. “I think this week has been an improvement from the Europeans,” said Daybell, who has been training with the national able bodied team in Slovenia, “and I’ve got a lot I can take away and work on over the next six months before Rio. I don’t think I performed to the best of my ability but I’m definitely moving forwards. I’m hoping that I can take away what I’ve learnt here and continue to practice as I’ve been doing over the last six months or so.”

GB Performance Director Gorazd Vecko was satisfied with his team’s performance with six months to go before the Paralympic Games in Rio.

“We had some great results such as Jack Hunter-Spivey beating the World number one for the first time and taking the bronze medal in the singles and he is progressing in the way we want. We were also really happy with Felicity Pickard who had a good win over the World number six and lost 3-2 - 11-9 in the fifth - against the Paralympic champion - she has a great future. This is the first competition for a lot of the players for five months so they are short of match practice and we now know what we need to correct and what we need to work on. It is the first competition in the preparation for the major competitions and our plan is to play our best table tennis in Rio in September.”