The GB team is assured of seven more medals in the team events at the Slovenia Open as seven teams have progressed through to tomorrow’s semi-finals. One of the best performances of the day came from class 8 player Aaron McKibbin. Playing in the class 10 team event with Kim Daybell he beat class 10 world number 8 Pavel Lukyanov of Russia 3-2 and then combined with Daybell to beat Lukyanov and Iurii Nostrodov in the doubles to complete a 3-0 win for GB.

“That’s definitely the best win of my career,” said the 21 year old Sheffield based Londoner. “I was a bit nervous when I lost the fourth set because I had my chance to take it but I felt relaxed going into the fifth set because all the pressure was on him and I had nothing to lose. It’s massive for my confidence and it shows that I can compete. Although I didn’t get the results in the singles I knew I was playing well and it was just a case of putting it into practice.”

Daybell had to work hard to beat the class 9 world number four Nozdrunov but held his nerve to win 12-10 in the fifth.

“I’m still not feeling quite 100% but it is important to grind matches out when you are not playing at your best,” said the 21 year old who is studying medicine at Leeds University. “There were some good moments and I thought he played really well so I was just pleased to pull through. Aaron and I were solid playing the doubles. It’s a new partnership - we haven’t really played together before but I think we just did the basics right and it was enough to win.”

Daybell and McKibbin followed up with a 3-1 win over Malaysia to top their group and receive a bye into the semi-finals.

GB’s men’s class 7 team of Will Bayley, Paul Karabardak and Billy Shilton secured top position in their group with a 3-2 win over Spain followed by a 3-0 win over a combined German/Brazilian team. 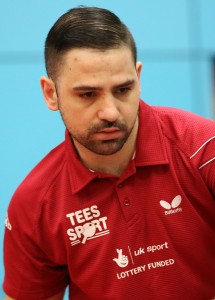 Bayley and Karabardak came from 0-2 down to win the doubles against Spain and then Karabardak won the deciding singles against Alberto Seoane after Bayley lost another tight match against Jordi Morales 11-8 in the fifth.

“We started poorly,” said Karabardak, “and just knew we had to start playing better and we managed to find a bit of form and win the doubles which turned out to be crucial. I don’t think I played that well against Seoane but I’ve got more experience than him and that helped me beat him in the end.”

In their final group match, after Karabardak had beaten the German Silvio Herbig 3-1, 15 year old Billy Shilton beat Gilberto Onofre from Brazil 3-0 and then combined with Bayley to win the doubles and the tie for GB 3-0. They now play Germany in tomorrow’s semi-final.

Shilton, from Stonehouse in Gloucestershire, was following up his win yesterday against Daryl Sterling of the USA and is an exciting talent.

“I don’t get to play with Will and Paul very often,” he said, “so it’s great experience to be part of the team. I can’t wait for the semi-final tomorrow; it’s going to be brilliant.”

Sara Head and Jane Campbell, bronze medalists in London 2012, topped their group in women’s class 1-3 with wins over France, 3-1, and a combined Brazil/Netherlands team 3-0. The Welsh partnership of Rob Davies and Paul Davies, class 1 European champions, also progressed to tomorrow’s semi-finals with a 3-0 win over fellow Welshman Thomas Matthews and playing partner Sylvio Keller from Switzerland.

Matthews and Keller went on to clinch their place in the semi-finals with a 3-0 win over Brazil.

“I’m playing well,” said Matthews, “better than in the singles so I just want to keep that going now. The more matches I play I feel I’m starting to read the game more and playing positively instead of backing off. It’s great playing with Sylvio - he’s a nice guy and speaks good English so that helps. I’m guaranteed a medal now which is amazing - I didn’t expect that coming in here so I’m looking forward to tomorrow.” Widnes teenager Jack Hunter-Spivey and Norwegian partner Tommy Urhaug, the Paralympic champion and world number one, topped their group with a 3-0 win against Croatia and then had to play a quarter-final against the Czech Republic. After Urhaug beat the Czech number one Rene Taus, Hunter-Spivey secured a hard-fought 3-2 win over Jaroslav Hadrava and then combined with Urhaug to win the doubles and book a place in tomorrow’s class 5 semi-finals.

David Wetherill and his Croatian partner Pavao Jozic beat Germany 3-0 and Switzerland 3-0 to go through to the semi-finals as group winners and guarantee the Torpoint player another medal to add to the bronze he won in the singles.

Class 9 player Ashley Facey Thompson, 19, playing with Nathan Thomas from Wales, did not progress to the knockout stages but had two good wins in his singles matches against Egypt, including a 3-1 success against class 10 player Abdelrahman Ahmed.

“I played well against Egypt and I can take positives from that,” said Facey Thompson. “I’m disappointed with my performance overall - I’m competing but not getting the results so I just have to train harder. I need to have more matches, be fully focused and believe in myself more.”

Detailed results can be found at http://www.ipttc.org/upload/results/files/