The GB Para Table Tennis Team travels to Europe next week for two of its most important tournaments in the build up to the World Championships in China later this year. World number one and European champion Rob Davies heads a 14 strong team of athletes taking part in the Slovenia Open from May 7-10, which will be followed a week later by the Slovakia Open (May 14-17). 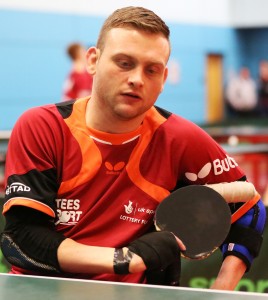 Davies, a former rugby player from Brecon, will be making his first competitive appearance of 2014 in Slovenia and faces tough competition from a very strong field in the men’s class 1 event that includes Paralympic and world champion and the man Davies replaced as world number one last year, Holger Nikelis from Germany.

“It would be nice to still be number one at the end of the season,” admitted Davies, “and I’ll do my best but we’ll just see how it goes.  I don’t really think about the rankings which is probably the best way because at the end of the day I’ve just got to go and win the next match. It will be good to get back to competition and see what standard I am at now. I’ve done a lot of hard training through the winter but I haven’t played a lot of matches so it will be good to see what more I can work on leading up to the World Championships.”

One of Davies’s toughest challenges could come from his team mate and fellow Welshman Paul Davies, who took silver in the European Championships. The bronze medalist from London 2012 is also making his seasonal debut in Slovenia after breaking his leg in the winter.

“The recovery was hard when I started training in January,” said Davies, “but now it doesn’t affect my game at all. I’m mentally and physically prepared and nearly 100% match fit so no excuses. It’s been a long time since the Europeans - September last year - but I’ve been around the block a few times so I get back into the zone quite quickly. I’m really excited about Slovenia - all the big names are there so bring it on. I can’t wait.”

Paralympic and European bronze medalist Sara Head, a class 3 player from Beddau, has also faced a fitness challenge after surgery during the winter.

“Training has been going well,” she said. “I’ve never had to come back from injury before and I’m looking forward to competing again because it’s been a slow start to the season for me.  Slovenia and Slovakia are back-to-back and that is going to be a challenge but I can’t wait to take up the challenge.”

Paralympic and European silver medalist Will Bayley (class 7) started his international season last month by winning gold in Italy, avenging his European final defeat by Mykhaylo Popov of the Ukraine in the semi-finals. Good results in Slovenia and Slovakia could see him reclaim the world number one ranking from another Ukrainian Maxym Nikolenko but the Sheffield based 26 year old from Tunbridge Wells is more focused on major championships than world rankings.

“I was really pleased to win gold in Italy,” said Bayley, “even though I wasn’t playing my best all the time as it shows I can win even when I’m not playing my best. Training has been going well and I feel that I am playing better now than I was in Italy so I’m looking forward to Slovenia and Slovakia. Being number one in the world sounds nice but winning the major tournaments is what really matters to me.” David Wetherill also started the season well in Italy, taking silver in the men’s class 6 singles, and is hoping to build on that in Slovenia.

“Italy was a good start,” said the 24 year old from Torpoint. “I didn’t play my best but I won matches and that is the most important thing. I’ve played a few more tournaments in the UK since then and I’ve had some good wins. I’ve always struggled to bring that domestic form into international tournaments but I’m pretty high on confidence at the moment so we’ll see.”

Sheffield based Londoner Aaron McKibbin picked up silver in Italy in the men’s class 8 team event but struggled for consistency, something he has been working hard to improve in training.

“It was mixed results in Italy,” he admitted, “but since then I’ve been working with the coaches to find out what is going to make me be the best player I can be. That has helped me and Italy also helped because I realised I need to work even harder. I was in winning positions in every match so I have to take the positives from that. My mental approach is getting better and I know I’ve prepared well and I’m playing good so I’ll just take it one game at a time.”

“Slovenia will be a good test to see what kind of level everyone is playing at,” said the 21 year old class 10 player from Sheffield. “We know it is going to be tough competition but hopefully I can perform well and show that I’ll be a contender in the World Championships in September.” Ashley Facey Thompson (class 9) won his first National title in March and the 19 year old Londoner is determined to use that to boost his confidence in Slovenia after a disappointing tournament in Italy.

“Italy was up and down,” he admitted. “I played well at times but I need to close the games out. Sometimes I’m not as confident playing matches as I am in training. I’ve definitely improved since last year but I need to play without fear of making mistakes as at the moment that is holding me back.”

GB Performance Director Gorazd Vecko said: “The Slovenia Open is the strongest tournament outside of the World Championships this year with around 310 players from more than 40 countries. Most of the top players in the world will be there so it will show us where our athletes are and what we need to do better in the training hall to prepare for China. This is the first year that counts towards qualification for the Paralympics in 2016 and so it is also important that we give our really promising younger players experience and the best chance to qualify for Rio.”