After beating class 7 World number one Will Bayley in the semi-finals Daybell recovered from losing the first set of the final to beat Ross Wilson 3-1 and win the National Men’s Open Standing title for the sixth time.

The 23 year old from Sheffield, who has taken a year out of his medical studies at Leeds University to focus on preparing for Rio, had earlier retained his men’s class 10 title and is unbeaten in all matches at the BTTAD National Championships.

“I was pleased to win today with the level going up and up all the time,” he said. “It’s a good thing for the sport that every year it is becoming more and more difficult for me to retain my title. I know the other GB players very well - we train together so they know how I play and they are all fantastic players in their own right. It is always difficult to play against your friends and people you know well so I was pleased today that I was able to pull it out of the bag.”

Daybell has been spending time training with the national squad in Slovenia and is clearly benefiting from being able to train full time.

“I think I am a lot sharper than last year when I was studying and training,” said Daybell. “Just having more matches and table time has helped me to tighten up my game and make less mistakes than I used to and I feel now that in crucial points when it is close at the end of sets I can rely on my shots whereas maybe last year it was a bit hit and miss. I am also getting used to playing at a higher pace, training in Slovenia with some really strong able bodied players, so that has helped me to improve.”

Wilson had the consolation of winning the men’s class 8 title, beating his GB team partner Aaron McKibbin 3-2 in the final, and then combined with McKibbin to beat Will Bayley and Billy Shilton in the final of the Men’s Open Standing Doubles.

Gilroy was winning the Ladies Open Wheelchair title for the 21st time and clinched the title in the round-robin event with a battling 3-2 win over defending champion and GB team mate Sara Head, coming back from 9-3 down in the fifth to win 14-12. 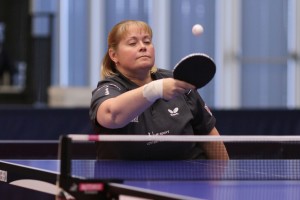 “I was really pleased that I managed to come back because normally I struggle with a match like that,” said Gilroy. “I slowed things down and took my time a bit more than I normally do. I didn’t play so well yesterday but today was a lot better - a lot more controlled - so things are coming together. I would rather play the number one in the world than my own teammates. I always find the Nationals hard when you are playing people you practice and train with all the time. It is one of the hardest tournaments for me. I’d like to say a big thank you to Mick Travis, Brian Barrett, Farrel Anthony and Neil Robinson who have been training with me while Arnie (Chan) has been out and without them I wouldn’t be where I am today.”

Hunter-Spivey won the class 4-5 title on Saturday and followed that up by retaining his Men’s Open Wheelchair title, beating Kevin Plowman 3-0 in the final. The 20 year old from Liverpool is now ranked number six in the World in class 5 and is improving all the time.

“It’s amazing to retain my title,” he said, “and it means a lot to me to be National champion. Kevin and I have had a lot of close matches in the past so I was really pleased to win. I think I have improved a lot in the past year - I’m playing my shots a lot more so I’m really happy.”

Hunter-Spivey was denied a clean sweep of titles when he and Megan Shackleton were beaten 3-1 in the final of the Open Wheelchair Doubles by London 2012 medalists Jane Campbell and Sara Head.