Rob Davies and Paul Davies started their first team competition together for two years with a hard-fought win yesterday against Brazil/Hungary. After losing the doubles 1-3 Rob Davies looked to be in trouble against the Brazilian Aloisio Lima Junior at 0-1, 5-9 but came back to win 3-1 and Paul Davies used all his battling qualities to defeat Endre Major 11-5 in the fifth.

They took on France today and after winning a tight first game 14-12 they won the doubles 3-0 in a much improved performance. Paul Davies lost in four close sets to Paralympic silver medalist Jean-Francois Ducay but Rob Davies secured the tie and a place in the semi-finals by beating Alan Rene Jean Papirer 3-1. “Our doubles today was a massive difference from yesterday,” said Paul Davies, “we played as a team like we can do. We got through yesterday - I had a big five setter against Major which I knew would be tough but I got the result. Lost to Ducay this time but I beat him in Slovenia so it’s one all. His coach just said to me ‘maybe we meet in the final in Rio’ so you never know.”

“I’m really chuffed that I managed to lift myself back up yesterday and get Paul and me into a winning position,” said Rob Davies, “as it is hard after losing in the singles. We played really well in the doubles today. We wanted to be clinical - it was an important doubles for us and it showed in the end so I’m happy we won and we’re back on form together. Now on to tomorrow.”

In women’s class 4 Gilroy and Kanova had to fight hard yesterday to beat the German/Dutch combination of Sandra Mikolaschek and Femke Cobben in the doubles 11-4 in the 5th. Gilroy then lost to World number four Mikolaschek 1-3 but a 3-0 win for Kanova against Cobben gave the British/Slovakian team a 2-1 win. They had another tough match against Turkey today and had to come from 2-0 down in the doubles to beat World number seven Nergiz Altintas and World bronze medalist Hatice Duman 3-2. At 0-2 Gilroy looked to be heading for defeat against Altintas in the first singles but she used all her experience and determination to fight her way back into the match and eventually won it 12-10 in the fifth to take her team into the semi-finals.

“I’m really struggling with my form at this competition,” admitted Gilroy, “so I’m finding it really difficult when I know how well I was playing at home. I’m just not putting it into practice as much as I want which I’m finding really frustrating. To come back from 2-0 down in doubles and again in singles - I’m really pleased with that.”

Wetherill and Seoane started their men’s class 6 team campaign with a 2-0 win against France/Ireland yesterday and they won their second match against Israel/Switzerland 2-1. Having won the doubles Wetherill secured the tie with a 3-0 win against Valentin Kneuss after Danny Bobrov had beaten Seoane 3-2.

In their final match against Greece Wetherill and Seoane won the doubles 3-0 and Wetherill clinched their place in the semi-finals as group winners with a 3-0 win against Giorgios Mouchthis .

In the women’s class 2-3 team event Campbell and Head won their first match against Russia/Italy with a 3-1 win in the doubles followed by a 3-0 win for Head against and the Italian Giada Rossi, the class 2 European bronze medalist.

“Our doubles was fantastic today,” said Campbell. “Some of the things we’ve worked on in training have come good so that is delightful actually. The key is understanding our positions, what we’re doing and where we are putting the ball - once we are doing that it makes it simpler for us.”

Head was also happy with her performance: “I’m pleased with how I’m playing. I haven’t been feeling too good so to play as well as that - I’m really happy. We play Korea tomorrow - it’s going to be good practice for us for Rio and a fantastic learning experience - bring it on!”

Daybell and  Facey Thompson started with a 2-0 win yesterday in men’s class 10 against a combined team from Austria, Chile and Kazakstan. The GB pair beat the Austrian Krisztian Gardos and Valentin Rene Letelier Mendoza from Chile in the doubles 3-1 and Daybell won the tie with a 3-0 win against Makhanbet Nassikhan from Kazakstan. In their second match today against Thailand/Hong Kong they lost the doubles 0-3 and although Daybell levelled the tie with a hard fought 3-1 win against Bunpot Sillapakong from Thailand it was the Asian Games bronze medalist Chi Yin Wong from Hong Kong who won the tie for his team with a 3-2 win against Facey Thompson. The GB pair have two more matches to play tomorrow.

Having won their opening match in men’s class 5 yesterday against the Czech Republic 2-0 Jack Hunter-Spivey and Tommy Urhaug from Norway progressed to the quarter-finals with a 2-0 win against Thailand. After losing a marathon first game in the doubles 16-18 they came back to win the match 3-1 and Hunter-Spivey won the tie with a 3-0 defeat of Maitree Kongruang in the first singles.

In the quarter-final they faced Serbia and after losing the doubles in three close sets Hunter-Spivey could not find his best form against World and European bronze medalist Mitar Palikuca and was beaten 0-3. Although disappointed the 21 year old from Liverpool was able to reflect on a successful competition after his silver medal in the singles.

“I’ve not played my best today which is disappointing,” he said, “but overall it has been a good competition for me. I think I have improved and people have been commenting on how well I’m playing so I’ve got to take the positives from it. Disappointed in the way I’ve played today but overall a good tournament.”

In men’s class 8 Aaron McKibbin and Billy Shilton had beaten a combined team from Australia and Thailand yesterday and faced the European team silver medalists Slovakia in their second match. They combined really well to win the doubles 3-0 and McKibbin then showed great character to come back from losing the first game against Richard Csejtey to beat the former World champion 3-1 and avenge his singles defeat by the Slovakian earlier in the tournament.

In their final group match they beat the combination of Marius Olczak from Poland and Asylkhan  Saysatov from Kazakstan 2-0, winning the doubles 3-0 before 17 year old Shilton beat 19 year old Olczak 3-1 in the first singles to ensure that they progressed as group winners.

That earned them a quarter-final against the very experienced Belgian team of Marc Ledoux and former Paralympic and World champion Mathieu Loicq and they made the perfect start with a 3-0 win in the doubles. McKibbin had beaten Loicq in the singles earlier in the week but this proved a match too far for the 24 year old Londoner and Loicq gained his revenge in a 3-0 win. Shilton then needed to beat Ledoux in the final singles but the former World number one had too much experience for the 17 year old and won the tie for Belgium with a 3-0 win.

It was a disappointing end to what had been a good day for the GB pair but both were able to take plenty of positives for the future. “It’s been a long two weeks,” said McKibbin, “and we’ve played a lot of matches. I think we did really well in the doubles which is a positive for the future but I was fighting hard to get going and summon some energy from somewhere. To be fair he (Loicq) played very well and I wasn’t at the races when I needed to be and that is something that won’t happen in Rio. Overall it has been a tough two weeks and some positive and negatives as always and a lot of stuff to work on and I’m looking forward to the next four months.” 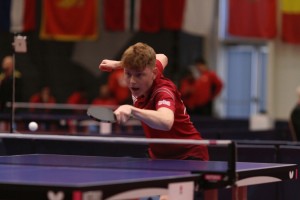 “I’ve never played with Aaron before so I think we did really well,” said Shilton. “We didn’t lose a set in doubles so that is definitely a positive for the future. It is definitely a massive learning curve - I’ve never experienced anything like that before - playing the last game against a top team like Belgium. I’ve learnt a lot over the last two weeks - this is my first time doing back-to-back competitions and to get the experience is really good and hopefully now I can push on for the up-coming tournaments.”