The GB team struck gold in Slovenia today as Will Bayley (class 7) and Rob Davies (class 1) took gold in the singles and there were also bronze medals for Paul Davies (class 1), David Wetherill (class 6) and Jane Campbell (class 3). 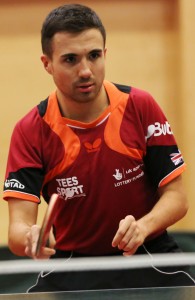 Bayley began the day with a 3-1 win over Sayed Youssef, the Egyptian he beat in the final here last year. A 3-0 win in the semi-final against Thorsten Schwinn from Germany set up a final against Jordi Morales, the world number four from Spain.

The Sheffield based world number two got off to a great start to go 1-0 up but lost the next two games and faced two match points in the fourth. However, he held his nerve to take the game 13-11 and never looked like losing from that point, taking the fifth and deciding game 11-3.

“It was a brilliant match to play in,” said Bayley, “because Jordi is such a fighter and he never makes it comfortable. I knew it was going to be a tough match because he was playing really well and I was really pleased to come through it especially from match points down. I think I left it a bit late but when he had the match point I thought I’m going to go for it now because if I don’t I’m going to lose anyway and when I managed to pull through that fourth set I knew that it had taken a lot out of him. I got off to a flyer in the last set and couldn’t really lose from there. This is one of my favourite wins in any tournament because of the closeness of it - I don’t think I’ve ever won a final from two match points down so it is nice. I felt a lot of pressure to win here so I’m really pleased to do the business.”

After a comfortable 3-0 win in the quarter final over Bruno De Paulo from Brazil, Rob Davies faced his old rival Jean-Francois Ducay from France in the semi-final. At 0-2 and match point down the former rugby player from Brecon looked down and out but he fought back magnificently to take the third game 15-13 and went on to take the match 11-7 in the fifth. “I just focused on getting that game,” said Davies afterwards. “I knew if I could get that first game on the board he would hopefully get a bit nervous. I just started playing after that and I was just so glad to come through. He beat me in London when I was 0-2 down and came back to 2-2 so I was paying him back for London again.”

Davies had no time to rest before the final against Andrea Borgato of Italy and once again showed why he is the European champion and world number one with a battling 3-1 victory to take the gold.

“Winning the Europeans last year has helped me mentally,” he admitted. “The disappointment in London was what made me play well last year - it made me more steely. I have had some close wins since then and they boost my confidence. This was my first real test since becoming world number one so to have won it was great. It shows I can do it and stay there. I didn’t play that well in the final to be honest but I came through it and that’s the main thing. I didn’t care how I won I just wanted to get it done. Really proud to have come through and my family will be really happy as well. I can go on from here now.”

Fellow Welshman Paul Davies, in his first competition since breaking his le g in the winter, needed all his fighting qualities to battle back from 1-2 down against the Argentinian Fernando Eberhardt to win his quarter final 11-6 in the fifth.

His semi-final against Andrea Borgato was a repeat of the European Championships semi-final which Davies won but this time it was the Italian who came out on top with a 3-1 win.

“I could have played better,” said the North Cornelly player, “but that’s no excuse. He played better on the day and deserved to win. To get a bronze after coming back from injury can’t be bad so I’m not disappointed. I’ll take the positives from here into the next tournament in Slovakia next week.” 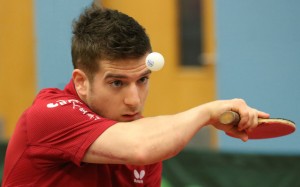 Wetherill came through his quarter final against the American Ari Arratia 3-0 and then lost out in a very close match against the world number two and reigning European champion Peter Rosenmeier, the Danish player winning 11-9 in the fifth.

“I’m a bit frustrated,” said Wetherill, from Torpoint. “I lost the first game easily but from then on I was in it and I battled well - I had match point in the fourth but I just got a bit nervous in the crucial times. I know I can do it and it is encouraging for next time. If I play my game I believe that I can win. Obviously I’m disappointed I didn’t do it today but I have to take the positives from that and I’m happy to win a medal.”

Jane Campbell was already assured of a bronze medal after her determined performance yesterday and found Michela Brunelli just too strong in her semi-final, the Italian taking the match 3-1.

“That wasn’t my best performance today,” said Campbell. “I know I could have done better so I’m a bit frustrated. I wasn’t playing cleverly and should have put the ball in better places. I was reacting rather than thinking. I wasn’t expecting to get a medal in my first tournament for a while so I’m very happy.”

Kim Daybell (class 10) came up against a talented newcomer in Denislav Kodjabashev from Bulgaria and never really found his form in a disappointing 0-3 loss although the Bulgarian did go on to take the gold medal.

“I just didn’t really get going,” admitted Daybell. “He did what I should have done and came out firing and I didn’t put him under the pressure to really test him. It would have been nice to challenge him a bit more and I can when I play better. I have to pick myself up now and try to play better in the team competition - there are still lots of matches to be played.”

GB Performance Director Gorazd Vecko said: ““I think we need to be happy with the results because for a lot of our Performance Squad athletes who we are expecting to medal in the World Championships this was the first tournament after the European Championships last year. It was the first tournament for Rob Davies as world number one so to win this tournament which is the strongest of the year so far is great. Next week in Slovakia will be an important milestone to see where he stands against the players from China and Korea. Will Bayley winning gold was very important as apart from the world number one and three from the Ukraine all the other top players in his class are here and for Jane Campbell to come back from a disappointing European Championship to win a bronze here is also a very good result.”

The tournament continues with the team event which starts later today and finishes on Saturday.