On the first day of the PTT Slovakia Open in Bratislava 11 out of 12 GB players progressed to the knockout stages of the singles events. Eight players will contest quarter-final matches tomorrow, including World number ones Will Bayley and Rob Davies, while Kim Daybell is assured of at least a bronze medal after reaching the semi-finals in men’s class 10. 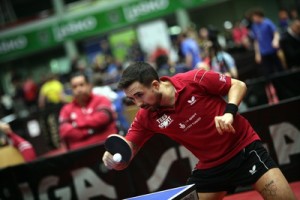 In men’s class 7 Bayley began with a 3-0 win over Masachika Inoue from Japan and was equally impressive in beating Ming Yip Lee from Hong Kong, the bronze medalist in the Asian Championships. The 28 year old World champion looked sharp and ready to continue the form that saw him take gold in Slovenia last week.

“I think I’m playing better than I was in Slovenia,” he said. “I’ve just taken a bit of confidence from that and I’m starting to play some good stuff and I’m enjoying it. I’m looking forward to the quarter finals tomorrow - every match is going to be tough now so I’ve got to be at my best tomorrow and give it everything I can.”

Rob Davies is also looking to follow up his men’s class 1 gold medal winning performance in Slovenia and had a tricky first match against his old rival Endre Major from Hungary, the former European team bronze medalist. The pair have had some very close matches in the past but Davies was always in control today in a 3-0 win. He followed that with a 3-0 win against Fernando Eberhardt from Argentina, the PanAmerican champion in 2013, and was also happy to make smooth progress into tomorrow’s quarter-finals.

“The first two games against Major were quite close,” he admitted. “I think it was my nerves more than anything but I loosened off for the last one and it was a good score line so I’m really happy with the way I came through that. It eased the pressure off me for the next match and I felt a bit more comfortable and played like I can. It is difficult trying to get yourself back up so soon after a tournament but I’ve had a good rest and good preparation so looking forward to tomorrow now and the quarter finals - I’m excited.”

Paul Davies had a walkover in his first match against the former European team gold medalist Martin Polkorab from Slovakia and then lost 3-1 to KiWon Nam from Korea, the World number four and World team gold medalist. A 3-0 win in his final match against Alan Papirer from France - including a run of 14 points in a row - took him through from his group and he received a bye into the quarter-finals.

Daybell dropped the opening game against Bunpot Sillapakong from Thailand, team bronze medalist in the Asian Championships, but came back to win 3-1 and followed that with a 3-1 win against Ivan Karabec from the Czech Republic, the former Paralympic, World and European champion who had beaten him in the quarter-finals of the European Championships last October. A 3-1 win over Carlos Carbinatti Junior from Brazil, the PanAmerican champion, took him through to the semi-finals tomorrow.

“I think it has been quite a difficult day,” said Daybell, “everyone is a bit tired as Slovenia has taken its toll but I was pleased in the way I played and I was able to grind the games out so it was a solid day. Karabec is always a difficult player to beat - every time you beat him you know you have played well and he always makes you work hard. I think I am playing a lot better than I was in the Europeans and that showed - I felt on top of him for most of the game and even though I didn’t play my best table tennis against him I felt I still won relatively comfortably so I was pleased. It’s another medal - two from two - so I’m looking to push on and hopefully make it to the final.”

In men’s class 9 Ashley Facey Thompson began with a 3-0 win against Dawid Sowa from Poland but a 3-1 loss to the PanAmerican champion and former Paralympic bronze medalist Tahl Leibovitz from the USA left him needing to beat Nurzhan Korpetayev from Kazakstan 3-0 to progress from the group. He did just that - coming through 7,3,4 to finish top of his group and receive a bye into tomorrow’s quarter-finals.

“I was really happy with my performance in the first match,” said 21 year old Facey Thompson. “The second match was a tricky game - he is a good player and a bit awkward but I gave it my all. I knew I needed to win 3-0 in my last game but that wasn’t in the back of my mind I just played my game and the result was 3-0 so I’m happy about that.”

David Wetherill started slowly against Alexander Nagy but recovered to beat the Slovakian 3-1 in his first match in men’s class 6. At 0-2 he looked to be heading for defeat against the former World silver medalist Bastien Grundeler from France but he came back superbly to win 11-4 in the fifth and topped his group after a 3-0 win against Georgios Mouchthis from Greece.

“I think it has been quite tough,” said the 26 year old, “because we have come straight from Slovenia and played a lot of table tennis recently. I haven’t been physically 100% today so every match has been a battle so I’m glad to have won all of them. I think I have a few more gears so that is encouraging so I’ll try my best and see what happens. As long as I can grind out the wins I’ll be happy.” In men’s class 8 Aaron McKibbin started with a comfortable 3-0 win against Clement Berthier from France and then after taking the first two games in his second match he overcame a spirited fight back by the former Paralympic and World champion Mathieu Loicq, the Belgian levelling at 2-2 before 24 year old McKibbin took the fifth game 11-5 to win the match 3-2. A 3-0 win against Lertsak Ngoenkrachang from Thailand took him into a last 16 match against Richard Csejtey from Slovakia and the former World champion used all his experience to take the match 3-1.

“He’s a good player and I struggled a lot with his service,” admitted McKibbin. “I felt I played OK in the rallies but I really struggled with the receive and in this sport that is massive when it comes down to it. He’s very experienced and it is one of the main strengths of his game so I need to go away and find a way to do better against it - I’ve been working hard at it but obviously it needs more work and hopefully I find a better way to play him.”

Billy Shilton played really well in a 3-1 defeat by Piotr Grudzien from Poland, the Paralympic team gold medalist and former Paralympic singles silver medalist, and won the battle of the 17 year olds against Lewis Dalby from France 3-1 to reach the last 16. He was drawn against the experienced Gyula Zborai from Hungary in a repeat of their match in Slovenia last week that Shilton won. He could not quite repeat that today, losing 1-3 to the European silver medalist, but he remains an exciting talent.

“I found it difficult today - silly mistakes cost me,” said Shilton. “If I had cut those out and kept my serves short then I think I would have won the match against Zborai. My first match against Grudzien was very good, so overall the singles haven’t been too bad but could be a lot better. All my matches in class 8 are getting a lot closer now. I had a similar feeling in class 7 last year - all the matches were really close - and now it is the same in class 8 so hopefully I can push on now.” 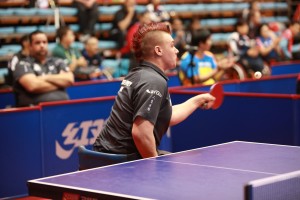 On his 21st birthday Jack Hunter-Spivey began with a 3-1 win against Alaxey Eremenko from Israel, the former Hungarian Open champion, but then found Ali Ozturk from Turkey, the men’s class 5 World team silver medalist, in good form and after winning a tight first game 12-10 he lost the next three. He needed to beat Wira Chiaochan from Thailand to go through and did so 3-1 to reach the quarter-finals.

“I’ve played some tough matches today,” said the 21 year old from Liverpool. “I feel that I’m struggling a bit physically to play a lot of matches but I’m playing some good table tennis and it is a good way to end my birthday. Ozturk is a player I haven’t played for years and I am definitely up there with the big boys now and feel that on my day I can beat them. It didn’t go my way today but it was very close and could have gone either way.”

Jane Campbell lost her opening match to Doris Mader from Austria, the Paralympic silver medalist, in three close games and then fought back from 2-1 down to beat OK Kim from Korea 12-10 in the fifth and progress to the quarter-finals.

“I had to regather my confidence after the loss this morning which I managed to do,” said Campbell. “At 2-1 down against Kim I was just trying to concentrate on what I should be doing - sometimes that is over-riding my natural instincts to do what I don’t necessarily want to do so I just concentrated on doing it. I’m very pleased to come through it.” Campbell’s women’s class 3 team partner Sara Head had never beaten Alena Kanova from Slovakia in 14 meetings and when the former Paralympic, World and European champion came back from 0-2 to level at 2-2 it looked as if she had the upper hand. However, in the fifth and deciding game it was Head who established an early lead and she went on to win the game 11-6 and the match 3-2. She followed that with a 3-1 win against Thais Fraga Severo from Brazil, the PanAmerican silver medalist but a 0-3 loss to Jiyu Koon from Korea in her final match meant that she missed out on a quarter-final place on countback.

“I’m really pleased to beat Kanova,” said Head. “I played really well - I played clever and it worked for me today so hopefully I can keep those tactics going. Every point and every win here helps for our seeding for Rio so I’m happy.”

In women’s class 4 Sue Gilroy was pushed all the way in her opening match against Helke Koller from Austria but eventually came through 11-3 in the fifth. In her second match she faced the in-form Nada Matic, World team gold medalist and winner of last week’s Slovenian Open, and the Serbian was just too strong in a 3-1 win. However, Gilroy will progress to tomorrow’s quarter-finals as the runner-up in her group.

“She (Matic) is the form player at the moment,” acknowledged Gilroy, “but I’m disappointed with how I played. I’ve lacked match practice as I couldn’t play in Slovenia and I think that is showing a little bit. Against Helke (Koller) I played three games really well and then two of the games I just didn’t play very well at all so a little bit inconsistent at the moment. Hopefully it will get better as I go through the tournament.”