The GB Para Table Tennis Team is guaranteed at least two more medals at the European Championships after the second day of the team competition, with Will Bayley and Paul Karabardak reaching the semi-finals of the men’s class 6-7 event and the Welsh duo of Rob Davies and Paul Davies winning both of their group matches today in the men’s class 1 event.

Bayley and Karabardak had to beat France in their final group match to progress to the semi-finals and they did it in style with a 3-0 win. Swansea’s Karabardak, celebrating his 28th birthday today, gave the pair a great start by beating Bastien Grundeler, the class 6 world silver medalist, 3-0, and was delighted with his performance. ”He may be a class below us but he is a top player,” said Karabardak. “I thought it was going to be difficult but I played tactically well and probably as well as I’ve played in this competition. I beat him quite comfortably but it was a bit of a nervy match and I was pleased to win 3-0. I think that gave the team the belief that we could win the tie.”

Rotherham based Bayley, silver medalist in the singles, started slowly against Kevin Dourbecker, the world number nine who had taken Maxym Nikolenko, the world number one, to five sets in the quarter-finals of the singles, but after losing the first game 13-11 he stormed back to win the next three in an ultimately convincing performance.

“I know how good he (Dourbecker) is,” said Bayley, “so I knew it was going to be a hard match but I think that was the best I’ve played. I was flying in the three sets I won so I was really happy with the way I played today.”

The GB pair are guaranteed at least a bronze medal and face Spain in the semi-finals tomorrow morning.

“Spain tomorrow will be a massive match,” admitted Bayley. “They are a great team and we always have some epic battles. We’ve only beaten them once in about eight years and that was in the last European Championships but I know whenever we play them in the big majors we have a chance so it will be a great match.”

Rob Davies and Paul Davies began with a comfortable 3-0 win over Slovakia, both players winning their opening singles 3-0 and then combining to win the doubles by the same score. They followed up with another 3-0 success over Hungary and were delighted with their day’s work.

“It was a good match,” said Brecon’s Rob Davies after the Hungary win, “and I’m glad we got it over with as quickly as we did as we’ve got to be up early in the morning for our next match.  We just want to keep going, match by match and hopefully we’ll keep playing the same and keep winning with any luck. It would be nice to have another gold medal - but we’ll see how it goes.”

After taking on his younger team mate in the final of the singles on Monday, Paul Davies was glad to be back on the same side of the net. 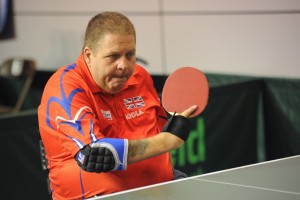 “I don’t want to be on the wrong side of him again,” said the man from North Cornelly. “That was 100% performance from both of us today - we did what we had to do to get through and get it over and done. That was top show that was. We’ve got to take each match as it comes, refocus and go again tomorrow.”

The GB pair are guaranteed a medal and can take the gold if they beat Germany and Italy tomorrow.

Sara Head and Jane Campbell had a tough start to the defence of their European title in the women’s class 3 team event taking on Italy, the team they beat in London last year to take the Paralympic bronze medal. In the first singles Campbell went 2-1 up against Michela Brunelli but the Italian number one fought back to take the match 3-2. Head, from Beddau,  then beat Clara Podda 3-0 to draw level but the Italians were too strong in the doubles, beating the GB pair 3-1 and Brunelli went on to clinch the tie with a 3-1 win against Head.

Head and Campbell kept their gold medal hopes alive with a 3-1 win over France in their second match. With the tie at 1-1 after the opening singles they combined to beat Fanny Bertrand and Isabelle Lafaye 3-0 in the doubles, fighting back from 10-8 down to clinch the match 12-10 in the third. Head then took on Bertrand in a replay of their semi-final in the singles, which the Frenchwoman had won 14-12 in the fifth. This time it was Head who prevailed in an equally tense final game, holding her nerve to take the match 16-14 in the fifth. 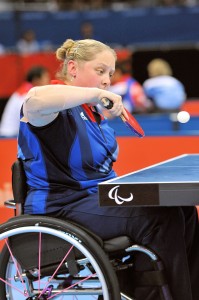 “I’m absolutely thrilled,” said Head. “To lose to her deuce in the fifth in the singles and then to win deuce in the fifth this time round - I was not going to let this one go. I’ve dreamt of the last one and I actually did what I was dreaming of this time. I think it was down to concentration and I Iearnt from my last match. You gain experience from matches like that and I took it into my next match. So it was brilliant.”

The doubles win gave the pair a vital advantage against France as Londoner Campbell admitted.

“It was disappointing to lose this morning,” she said, “and I think this time we realised the doubles was crucial and we just went hell for leather until we did it. We’ve still got all to play for tomorrow - there is no way of working out who needs to do what at the moment so we’ve just got to try and win our final two matches against Turkey and Croatia.”

Kim Daybell and Ashley Facey Thompson were guaranteed a medal in the men’s class 10 team event if they could beat France but the task proved just beyond them as a combination of nerves and inexperience resulted in a 3-2 loss. Once again the doubles proved crucial, as Daybell acknowledged.

“The doubles was the big match - they played a really good match to be fair and kept the ball on the table. They knew we were nervous and did what they had to do to win.”

The 21 year old medical student from Sheffield, who won both his singles matches, was nevertheless pleased with his performance and determined to learn from the experience.

“We know we are ready,” he said, “and it is obvious to everyone we are competing with the best players. We are clearly as good as them , we’re involved in close games and it is just about crossing the finish line so next time I’ll come back and try to play a little more freely and hopefully the results will be different.”