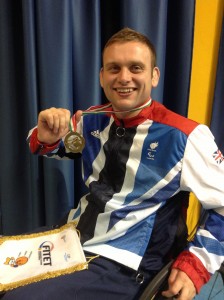 Newly crowned European champion and World number one Rob Davies has been nominated for the IPC Athlete of the Month for October.

The 29 year old from Brecon won gold in the men’s class 1 singles and team events at the European Championships in Italy after which he moved to the top of the world rankings in his class.

The other athletes nominated are:

To register a vote for Rob Davies go to the IPC website at www.paralympic.org.uk and click on his name.