Karabardak and Shilton topped their group with wins against the Netherlands and Russia and survived a tough battle against Japan in the semi-finals, Shilton clinching the tie with a 3-1 victory over Hiromoto Kita. In the final against a combined team from Croatia and Korea it was Karabardak who won the deciding match, beating Jae Jin Kim of Korea 3-0 to take the gold.

“I played OK,” said Karabardak, “although not my best. I had to grind out wins which made it difficult but I managed it so I’m pleased with that.”

“My form in the singles was up-and-down,” admitted Shilton. “I think I played my best in the semi-finals and I was very happy with that.”

Shackleton and her playing partners Alena Kanova from Slovakia and the Israeli Chagit Yona Brill also came through their group with two wins and beat a combined Italian/Austrian team in the semi-finals 3-1. Despite the experience of former World champion Kanova they lost 3-1 to Korea in the final but 15 year old Shackleton is learning all the time and is a great prospect for the future.

“I played well,” said Shackleton, “as there were a lot of distractions in the hall. I feel that I have improved a lot since France and I am controlling my nerves a lot better.” 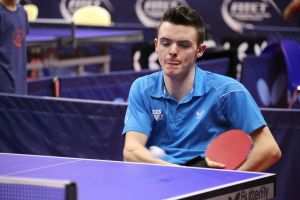 The men’s class 1 team event was played in a round-robin format and Matthews combined with Federico Falco from Italy to beat a combined team from Korea and Russia 3-1 and enjoyed a walkover against Korea. A very close 3-2 defeat in the doubles against Hungary was the turning point in a 3-1 loss which left them in second place at the end of the competition and earned them a silver medal.

“I played quite well,” said Matthews, “although the nerves still take over at times. I’ve definitely improved over the winter so I’m happy with that.”

Facey Thompson and self-funding GB player Thomas topped their group with wins against Norway/Russia and Austria/Hungary but they had to be content with the bronze after losing 3-2 to Italy in the semi-final. Despite a battling 3-2 win by Facey Thompson over Lorenzo Cordua which levelled the tie at 2-2, the deciding match went to Italy with impressive newcomer Mohamed Aline Kalem proving too strong for Thomas in a 3-0 win.

“It’s been an up-and-down tournament for me,” said Facey Thompson. “I didn’t play my best but I tried hard.”