ance Squad, has won the world junior title at the IWAS (International Wheelchair and Amputee Sports Federation) World Junior Games in Stoke Mandeville. The 15 year old from Todmorden took gold in the open and girls categories and also combined with Lucie Bouron to take bronze in the team event.

The 10th IWAS World Junior Games featured more than 300 athletes under the age of 23 from 31 countries and the table tennis competition included a number of players world ranked in senior competition.

After losing one of her three group matches to Wing Cheon Lau from Hong Kong, Shackleton went through to the knockout stages as the runner-up in her group and had to play another Chinese player Cheuk Him Tang, who was unbeaten in his three group matches. Their quarter final was, as Shackleton said afterwards, “a right battle”, which the British player eventually won 15-13 in the fifth.

“I think it was one of the closest matches I’ve played and won,” admitted Shackleton. “I was really pleased to beat a Chinese player as table tennis is their sport and they are basically the best in the world and it was a good match so it felt good to win it.”

A 3-1 semi-final win against GB team mate Nicko Anderson took her into the final where she beat another GB team mate Daniel Bullen 3-1 to take the gold. 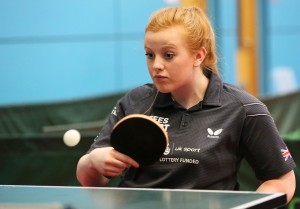 “Beating Nicko was a good win for me,” said Shackleton, “because I do struggle against him as he is a really talented player. Daniel and I always have really close matches and in a way it was a nice match to play against a team mate knowing one of us was going to get the gold and the other would get the silver. It is always hard beating your team mates because you want everyone to do well but I’m happy that I won and it is nice to have beaten the boys.”

Shackleton has made rapid progress since making her international debut in the Belgium Open last year.

“The experience of losing a really close match in the quarter finals in Belgium really motivated me,” she said, “and meant that I’ve trained even harder because I don’t want to be in that position again. I think I’ve improved a lot this year and I’m finally starting to really understand the game and how to win matches. I find training easier than matches and I think I play better in training but I’m learning more about the tactical side.

“It feels weird to say that I’m a world champion - I didn’t think it would come so early in my career but I’ve worked hard for it and I really wanted it so I think I deserve the title. My next major goal is to win a factor 20 tournament and get into the top 20 in the world rankings and I also hope that I will be selected to play in the European Championships next year.”