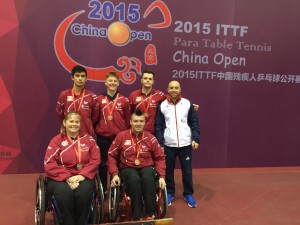 Gilroy and Patel started their round robin team event with a 3-1 win over Brazil followed by a 3-2 victory over Chinese Taipei but a 3-0 defeat by the very strong Chinese team meant they had to be content with the silver medal. Nevertheless it was a good performance by four-time Paralympian Gilroy, who had been disappointed with her performance in the singles.

“I’m really pleased with how I played against the Chinese today,” said the class 4 Barnsley athlete. “Losing 13-10 in the fifth against the class 5 World number one shows I can compete with the Chinese which is positive for the future.” McKibbin, Daybell and Shilton progressed from their group with wins over combined teams from Brazil/Portugal and Poland/Japan and understandably found a very experienced Chinese team too strong in the semi-finals in a 3-0 defeat.

“I came here with a job to do and I feel that I was successful in achieving that,” said 24 year old McKibbin. “I’m very happy to have performed to a good level under these circumstances and I’ve shown that I can beat the best players in the world. It’s now time to kick on in training for next year.” For 17 year old class 8 player Shilton it was a first experience of both playing in China and competing against class 10 players.

“I’m really pleased with the way I have played,” said the Gloucestershire teenager. “I was very happy to beat the Polish class 8 player in the singles as he has won gold medals in Paralympic Games. I’ve enjoyed playing team event in class 10 which has given me the opportunity to play against top players and I have learnt a lot. It’s been really exciting to play for the first time in China and I hope I will return in the future.” Daybell, who has taken a year off from his medical studies at Leeds University to focus on training for Rio, said: “It has been a challenging experience knowing that I came here to do a job under high pressure situations. I have been pleased that I have come through some tight matches and I’m happy to win a team medal which is always great when you’re representing your country.” Hunter-Spivey and Lis lost a very tight match with China 3-2 but progressed from their group with a 3-1 win over a combined team from Korea and Spain. They also had to be content with a bronze medal when Hunter-Spivey’s Polish partner withdrew from the semi-final which gave their opponents from Chinese Taipei a walkover into the final.

“I feel like I’ve played really well throughout the competition,” said Hunter-Spivey. “I’ve had some very good wins under the circumstances and it gives me a good chance of qualification for Rio.”

GB head coach Greg Baker commented: “Overall this competition has been a huge success for us. We came here with a mission and I can honestly say we exceeded what we set out to do. We had athletes competing and gaining valuable experience against Chinese athletes and others who won matches under the pressure of qualification for Rio. The athletes who competed here are now in a strong position to qualify for Rio and also, to have a singles winner here in Aaron McKibbin shows that we are in a strong position and ready to push on for next year.”