Saturday, September 13: It’s day six of the World Championships and a leisurely start for most as we only have Will and Paul in action today and their semi-final against Ukraine does not start until 12.00. At 11.45 the warm-up hall is almost deserted as the players for the 12.00 matches are all in the call area. Will and Paul were due to be on table 5 but the 10.00 women’s match between Russia and the Ukraine is still in progress so they have been moved to table 7 and at 12.00 they enter the competition hall. All the team are here to support them and we know they have a mountain to climb against the class 7 number one and number three in the world. Paul is first up against Nikolenko and the world number one looks as if he means business racing through the first set 11-5. But Paul starts to play well in the second set and a great forehand gives him the lead at 6-5. At 7-6 after a long rally Nikolenko cannot deal with another great forehand from Paul and he moves to 8-6 and goes on to take the set 11-9.

In front of us Mykhaylo Popov is doing some stretching exercises and Will is walking up and down - they will be playing the second singles. It’s noisy in the hall as the French are singing and the Polish are blowing their horns - it’s amazing that table tennis players can concentrate when there is so much noise and it’s hard to imagine Djokovic or Nadal playing a Grand Slam final in the same atmosphere.

Nikolenko clearly has a point to prove today and he takes the third set 11-5 and despite some brave play from Paul he loses the fourth set 8-11 and Ukraine take a 1-0 lead. The reaction of Nikolenko at the end of the match shows his relief at winning the first leg and Paul pushed him all the way.

Nikolenko and Popov have a score to settle with Will having both lost to him in the singles and Will skips around the table trying to convince the Ukrainians that he is not as tired as we all know he is. The first few points are shared but then Popov, who is twice the size of Will, starts unleashing some of his powerful shots and he takes the first set 11-5. After so many tough matches this week can Will summon any more reserves of energy? He comes out fighting at the start of the second and a loud “Cho!” when he wins the first point tells everyone that he is still up for this. As Will moves to 6-0 Popov looks over at his bench in disbelief and Will goes on to finish off the set 11-5 with a great winner. A case of ‘anything you can do…’.

Into the third set and a forehand winner from Will flies past Popov and takes him to 2-0 but Popov comes back to take the next two points. He gives a shout of frustration when an attempted forehand hits the top of the net and flies long and Will comes back to level again but at 7-7 he finds the net and Gorazd calls a time out. Will loses the next point but then pressures Popov into a series of errors and he has the third set 11-9

At 1-1 in the fourth Rob starts up a chant of “Let’s Go GB, Let’s Go!” and Will responds with some brilliant play and clenches his fist as another winner takes him to 8-5. At 9-6 a great rally ends with an error from Popov and at match point down he serves into the net and Will takes the set 11-6 and the match 3-1 to level the tie. A great effort from Will and Popov returns to his bench with a look that says: “What could I do?”

We all know that the doubles is going to be crucial. Will and Paul have come so close to beating Nikolenko and Popov on a number of occasions but it will take a massive effort and a bit of luck on our side.

The next set is all Ukraine and despite some great winners from both Will and Paul we lose it 5-11. We know our boys won’t give up and they make a good start to the third set moving quickly into a 6-2 lead. Although Ukraine reduce the deficit to one point Will and Paul hold on and take the set 11-8. Another good start to the fourth gives them a 4-0 lead and they keep the advantage all the way through with some great play to take the set 11-6 and level the match at 2-2.

A brave comeback but can they finish it off and finally beat the Ukraine pair? A glance to the next-door table tells us that in the other semi-final Keli Liao has match point against Jordi Morales to level the tie for China against Spain but to be honest at the moment if you are British who cares? A winner from Nikolenko takes Ukraine to 3-1 and he attempts to show that he is full of energy by bouncing on his toes as he waits to receive serve. At 4-1 down Gorazd calls a time out and although Will and Paul lose the next point they come back to 4-5 and it is now time for the Ukraine coach to call a time out. At 4-6 a brilliant rally and an amazing winner from Will has us all on our feet and another cry of “Let’s Go GB!” goes out. Rob is leading the cheering for us and one of the watching Ukraine team calls out something which could have been “Let’s Go Ukraine, Let’s Go!” but unfortunately our grasp of Ukrainian is also sadly lacking.

Some confusion over who should be serving next halts the momentum and appears to distract Will and Paul and the end of the match is something of an anti-climax as Ukraine take the next five points to secure the win 3-2 and take a 2-1 lead in the semi-final.

It’s a disappointing end to what was a great match and we all know that the mountain has just become Everest. Will now has to beat Nikolenko to keep the tie alive - after the disappointment of the doubles does he have any reserves of energy left? 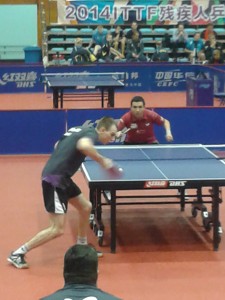 At 2-5 in the first set we fear that this is going to be one match too many for Will but some great defence and clever play gets him back level at 9-9. An error from Nikolenko gives Will a set point at 11-10 but Nikolenko saves it and goes on to take the set 14-12. The effort appears to have drained Will and Nikolenko takes the second 11-6 but Will is a fighter as well as a champion and at 10-6 he has four points to win the third. Nikolenko recovers the deficit and has match points at 12-11 and then 13-12 but Will is fighting for his life and a great rally gives him another set point at 15-14 which he converts when Nikolenko fires his shot into the net.

Somehow Will is still in the match and when he takes an 8-4 lead in the fourth we dare to hope that he can complete another remarkable comeback. But he is clearly running on pure adrenalin now and after a tired shot at 7-5 he bounces on his toes a few times trying to tell himself he can still do this. At 8-8 Gorazd calls a time out but it is the last throw of the dice and Nikolenko takes the next three points and the match.

Will has given everything but it was in the end one match too far. So our World Championships are over but the boys have done us proud and have a well-deserved bronze medal. We all troop out of the competition hall for the last time and head back to the accommodation block. Will and Paul will be back tomorrow for the medal ceremony and we will all be there to give them a cheer.

For now it is time to relax and take a trip to the famous Silk Street market in Beijing. Hopefully we can pick up some bargains but we will not find anything as valuable as the four medals our talented team have won this week.