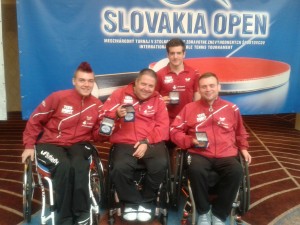 On a day of major upsets there was disappointment for Will Bayley, who went out in the quarter finals to a very good Chinese opponent.

Paul Davies came up against a determined Jean-Francois Ducay in the final of the men’s class 1 event and after losing the first two sets he came back to win the third 11-4. However, the London 2012 silver medalist has been in great form here and although Davies saved three match points the Frenchman clinched the gold 11-8 in the fourth.

“I only had five minutes to prepare for the final but that wasn’t the reason I lost,” said Davies, from North Cornelly. “He was definitely the better player on the day. My tactics were correct but I just wasn’t giving the ball enough today. Fair play to him he deserved to win. I never thought I’d get to the final here to be honest - everyone is here except Holger (Nikelis) and I’ve got to say thank you to my coach Neil Robinson - he knows me inside out and knows when to push me. I’ve been beaten by a better player on the day but next time.”

Earlier in the day Davies had a comfortable 3-0 win in his quarter final against the very experienced Matti Launonen from Finland and then faced the world number four from Korea, Chang Ho Lee, in a repeat of the bronze medal match from London 2012 that Davies won in five sets. Once again the match went the distance and Davies showed all his skill and fighting qualities to win the fifth set 11-8 and the match 3-2.

“I’m chuffed to bits,” said Davies. “I was a bit nervous about it and was behind at one stage but the tiger got me out in the end. It was a really tough game - he is above me in the rankings so to take his scalp has done my ranking good.”

Playing in his first final in a factor 40 tournament teenager Jack Hunter-Spivey was up against the world number two Ningning Cao, having played him in the group stages yesterday. Once again the Chinese player had too much experience and skill for the 19 year old from Liverpool, winning 3-0, but Hunter-Spivey competed well and can be very proud of his performance here.

“Being in a final of a factor 40 is something I’ve dreamed about since I was a young lad,” said Hunter-Spivey, “and I think I competed really well with him and had a chance to take a set off him. This is a massive boost especially with the World Championships coming up - I’ve beaten four or five players who are going to the Worlds so I’m in with a chance and as long as I play my best table tennis I can achieve whatever I want.”

In his semi-final Hunter-Spivey showed great character and determination to come back from 1-2 down against the world number three from Serbia Mitar Palikuca. The 19 year old from Liverpool, who beat Palikuca in Slovenia last week, was 3-6 down in the fourth but recovered to win the set 11-9 and won the match 11-6 in the fifth.

“I’ve beaten him the last four times I’ve played him,” said Hunter-Spivey, “and psychologically that helped me massively and I think it is in his head now as well. I had to battle and was 2-1 down and I think I showed good character by coming back and winning. To be fair to him he played really well but on the day I was a little bit better so it’s a good win for me.”

Hunter-Spivey had progressed to the semi-finals without hitting a ball as his quarter final opponent Tommy Urhaug from Norway withdrew due to injury. The world number one and Paralympic champion is hoping to recover in time to partner Hunter-Spivey in the team competition that starts this evening. 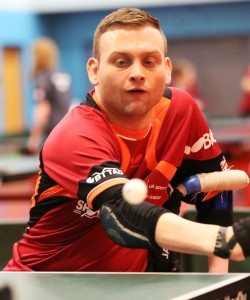 In his quarter final Rob Davies came back from 1-2 down to beat Andrea Borgato from Italy who was defending his title here. The Welshman looked in trouble at 0-4 down in the fifth but held his nerve to take the set 11-8 and the match 3-2. In the semi-final he faced old rival Jean-Francois Ducay and could never really get into the match, losing 0-3 to the Frenchman who was on top form.

“I’ve got to use this as a positive and move on,” said a disappointed Davies. “We’ve got the team event coming up and I’ll try to pick my game up a bit - get in the practice hall and work on it. He (Ducay) had good tactics and I wasn’t really at the races against him today. That’s what happens in sport so I’ve got to move on, put it behind me and work on getting gold in the team event.” Torpoint’s David Wetherill began with a 3-1 win in his quarter-final against Raimondo Alecci of Italy, recovering well after losing an 8-4 advantage in the second set to his tricky opponent which levelled the match at 1-1. He started well in his semi-final against Alberto Seoane but the Spaniard is a tough competitor and came back to win the match 12-10 in the fourth.

“It was a difficult match,” said Wetherill. “I never really found my groove even though I won the first set. I didn’t feel comfortable - I never really settled and just tried to battle for each point. I was a bit too negative on my backhand and missed too many forehands.”

Paralympic silver medalist Will Bayley never recovered from a slow start in his quarter final against the very talented Keli Liao from China and although he fought back to take the third set and had chances in the fourth he went down 9-11 in the fourth.

“I didn’t play my best but he played great,” said Bayley. “I didn’t start well at all - I struggled with the service in the first two sets - and when you are 2-0 down to someone who can play like that it is difficult. I knew if I took that fourth end it could have been a different story but he played really well and he deserved to win today. It was a tough game but I’ve got to bounce back and now I’m ready to play him in the World Championships for sure.”

Swansea’s Paul Karabardak won a great first set 16-14 against Maksym Nikolenko in his men’s class 7 quarter final and had chances to win the second and third but the world number one from the Ukraine was just too strong and took the match 3-1.

Bayley and Karabardak now focus on the team competition in which they play a match against Japan this evening.