Davies, the world number one, had to come from 2-1 down in his final against old rival Jean-Francois Ducay from France, who had beaten Paralympic and world champion Holger Nikelis in the semi-finals. The 29 year old from Brecon, who had earlier recorded a much easier 3-0 victory against Ducay in the group stages, showed all his fighting spirit to clinch the gold 3-2. 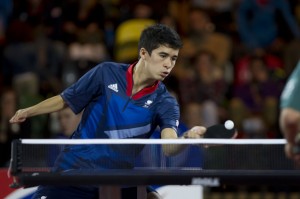 Leeds medical student Daybell, 21, also showed great resolve on his way to winning gold, coming back from 2-0 down against Karim Boumedouha from France in the semi-finals before beating the Russian Pavel Lukyanov 3-1 in the final.

Wetherill, from Torpoint, put a disappointing European Championships performance behind him by beating Tim Laue from Germany in the final 3-1, having earlier beaten Michael Azulay of Sweden 3-1 in the semi-finals.

Hunter-Spivey, 18, from Widnes, beat Ching-Chin Tsai of Chinese Taipei 3-1 in his semi-final and took the first set off the world number three Valentin Baus in the final before the German’s greater experience told in a 3-1 win.