Teenager Megan Shackleton won her second gold medal at the at the first Cote d’Azur International in Hyères les Palmiers today when she and her Israeli partner Caroline Tabib won the women’s class 4-5 team event. The GB team is also assured of at least two more medals tomorrow as Kim Daybell and Ashley Facey Thompson are through to the semi-finals of the men’s class 10 event and 16 year old Billy Shilton and his Swedish partner Nicklas Westerberg will contest the semi-finals of the men’s class 7 event. After a 3-1 win against Russia yesterday 15 year old Shackleton and Tabib started today with a 3-0 win against France. With the women’s class 4-5 team event played in a round-robin format they needed to win their final match against a combined team from Germany, Norway and the Netherlands to take the gold medal. Shackleton gave them the perfect start by beating Laurance Taburet from Germany 3-0 and Tabib then defeated the Norwegian Sabine Femtehjel by the same score. The pair always looked in command against Taburet and Moerdijk of the Netherlands and won the doubles 3-0 on their third match point to clinch the gold.

“I’ve played well for most of the tournament,” said Shackleton, who has not lost a match here in either singles or team. “I’m really happy with how I’ve done and training is paying off. Caroline and I are a similar age and we’re on the same wavelength and it’s nice to have someone on your team who wants to win just as much as you do. Knowing that I’ve won two gold medals is going to give me a lot of confidence - I’ve played consistently through the tournament and hopefully I can continue to do that next season. There’s still a lot of room for improvement.” Daybell and Facey Thompson had started their team event with a 3-0 win against Brazil yesterday and began today with a tough match against Russia. Daybell struggled to find his form against Vladimir Glasov in a 0-3 loss and although Facey Thompson made a good start against Pavel Lukyjanov the class 10 world number ten came back to win the match 3-1. At 0-2 down in the doubles the GB pair looked down and out but they fought back superbly to win 3-2 and Daybell then dug deep to beat Lukyjanov in three tight sets. In the deciding tie Facey Thompson, a class 9 player, again started well against Glasov but the imposing class 10 Russian was not to be denied and clinched the match and the tie 12-10 in the fourth. That left the GB pair needing to beat the combined team of Linus Karlsson from Sweden and Irishman Thomas Davis. The doubles again proved crucial with Daybell and Facey Thompson recovering from 5-8 down in the fifth to take the deciding set 11-9 and Daybell then clinched their place in the semi-finals with a 3-1 win over Davis.

“It was very hot in the hall today,” admitted Daybell, “so it was quite draining and it was one of those days when you just have to get your head down and try and grind out the results. Losing 3-2 to Russia was not a bad result and the Irish and Swedish boys are a strong team so I was glad we were able to pull through.”

“I was pleased with the doubles,” said Facey Thompson, “because they were vital today. It was a good pressure moment and I think I conquered it so I’m really happy. You just have to go for it - the game is not finished so you just have to keep playing and I’m pleased we managed to get back in the game.” 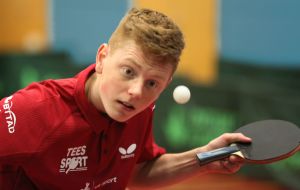 Shilton and Westerberg started with a 3-0 win against the Russian/Korean combination yesterday and recorded another 3-0 win against the Netherlands. That assured them of a semi-final place but they needed a win in their final group match against the team from Germany and Brazil to go through as group winners. With German newcomer Jorg Schnelder beating both Shilton and Westerberg and the GB/Swedish combination winning the doubles Shilton was left with the difficult task of winning the final singles against Felipe Figueiredo Formentin. The Gloucestershire teenager showed great composure to win the match 3-0 and clinch the tie 3-2.

“I was very nervous,” admitted Shilton, “but once I got on the table and started knocking up I was OK and I just played my game. We are working really well in the doubles and tomorrow’s semi-final should be good.”

In the round-robin men’s class 6 team event Martin Perry and Costa Rica’s Domingo Arguello started with a 3-0 win yesterday against an American/Korean team. In their first match today they defeated Sweden 3-1 and they followed that with hard-fought 3-2 victory over Greece. They can take gold tomorrow if they beat Germany.

Welshman Tom Matthews and his American partner Sebastian Defrancesco found the Swiss/German combination of Marcus Sieger and Sylvio Keller too good in their first men’s class 1 team match yesterday and had a tough match today against France. Matthews got them off to a great start with a win against Vincent Thomas but after Jean-Francois Ducay beat Defrancesco the French pair combined to win a tight doubles match in four sets. Ducay, the London 2012 silver medalist, had too much experience for Matthews and clinched the tie for France with a 3-0 win.

Matthews and Defrancesco play their final match in the round-robin tournament against a French/Korean team tomorrow.

Daniel Bullen and his American partner Andre Scott had a tough start in the men’s class 5 team event against Germany yesterday which resulted in a 3-0 loss. They took on the French team today and with Scott winning both his singles and combining with Bullen to win the doubles they took the tie 3-1 and progressed to a quarter-final against a team from Argentina and Italy. Although Scott won the first singles against Fabrizio Bove from Italy the combined experience of Bove and his Argentinian partner Daniel Rodriguez Ochoa proved too much and they went on to take the tie 3-1.

Nevertheless the 16 year old from St Neots can be very proud of his performance in only his second international tournament.

“I’ve played well,” he said, “although not as well as I could have and I’ve learnt a lot from the tournament. I’ve got some Grand Prix events in the UK and the National Junior League this winter so hopefully that will give me plenty of good match practice ready for next season.”

Self-funded GB players Rajan Waterman and Craig Allen are also competing in the class 10 team and started yesterday with a walkover when the French team was withdrawn. Their first match today was against a combined Argentina/France team and although Waterman won both his singles against Dario Neira and Benoit Grasset the doubles proved crucial and the GB pair lost the match 3-1 and the tie 3-2. A 3-0 loss to the Netherlands in their final match meant that they did not progress to the semi-finals.

Ross Wilson was withdrawn from the team event as a precaution due to some minor inflammation in his arm following his victory in the men’s class 8 singles final yesterday.