Shilton, from Stonehouse in Gloucestershire, and Westerberg reached the final with a 3-0 win over Argentina in the morning’s semi-final. Westerberg beat Pablo Ferro 3-0 and Shilton defeated Aleksy Kaniuka by the same score and they went on to clinch the tie with a 3-0 win in the doubles.

That took them through to face the Brazilian/German combination of Felipe Figueiredo Formentin and Jorg Schnelder in the final - a repeat of their group match yesterday which Shilton and Westerberg had won 3-2. In the opening singles against the Brazilian Shilton held his nerve to take a very close opening set 16-14 and went on to take the next two sets 5 and 6 to put his team 1-0 up. Westerberg then played a great match to beat the powerful Schnelder 3-1 and avenge his defeat by the German yesterday before combining with Shilton to win the doubles 3-0 and the final 3-0.

“I knew that if I won the first set I would have a very good chance to win the game,” said Shilton, “and it was really close but luckily I managed to pull through. I think I relaxed then and I was playing really well - I knew that if I played my best it would be difficult for him to beat me. We played really well in the doubles - we haven’t played together before this tournament so to win comfortably was really good.”

It was a great performance by Shilton, who was winning the second gold medal of his short international career and is a real prospect for the future.

“This gold medal means a lot more because when I won gold in Slovenia I was watching Will (Bayley) and Paul (Karabardak) and getting inspiration from what they were doing so to do it on my own with Nicklas is fantastic. I think I’ve improved a lot this year and all the coaches have really helped me. This is going to drive me on and keep me training hard so hopefully I can keep on improving.”

Daybell and Facey Thompson had a tough semi-final against a talented Dutch team. In the opening singles Facey Thompson played well against the higher ranked Gerben Last but the Dutchman showed his greater experience in the big points to win 3-1. In the second singles world number eight Bas Hergelink produced his best form against Daybell, who could not find his touch today and although the Leeds University medical student levelled at 1-1 he could not prevent Hergelink from taking the match 3-1 with some stunning winners. The GB pair rallied bravely to take the doubles 3-1 but Daybell has played a lot of matches recently and although he fought hard he had no reserves left for the fourth singles which Last won 3-1 to take the Dutch into the final. “It was hard,” admitted 22 year old Daybell. “We’ve both played a lot of matches this tournament and we were feeling it today but we gave it our best shot and I think we played against a very good team and we gave them a run for their money. Table tennis is so fast and you have to make sure your movement is on point and you are as sharp as you can be and that showed up today, especially with me as I felt a bit sluggish, but it wasn’t a bad performance.”

Winning all their doubles matches in this tournament against some of the top European teams augurs well for next season and Rio in 2016. 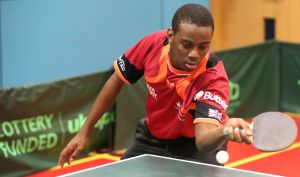 “We’ve played well here in doubles,” said Facey Thompson, “and this is our first team event together for a while so I’m happy with that. I’m really happy to have won two medals - I’m disappointed not to have got to the final in either singles or team but it was good overall and I’m happy to have a bronze in both.”

The 19 year old Sheffield based Londoner has also shown great improvement this season with wins over top ten players and has a promising future.

“I’m happy with the way things are going,” he said. “I’ve been working hard in training, playing better and believing in myself more. Everything is coming together - I’ve got things to work on in training but I’m making progress and I just need to keep on progressing.”

Having won their first three matches in the round-robin men’s class 6 team event Perry and Arguello knew that a win in their final match against Germany would give them the gold medal. Singles gold medalist Thomasz Kusiak was too strong for Arguello in the opening singles and although Perry won the first set against Tim Laue and had chances to win the next three the German showed his experience in taking the match 3-1. Arguello and Perry took a 2-1 lead in the doubles but the German pair came back to win a tight fourth set and took the match 11-4 in the fifth.

With Germany then losing 3-2 to Sweden in their final match that left GB/Costa Rica, Sweden and Germany with three wins and one loss each so the medals were decided on count-back with Germany taking gold, Sweden silver and Perry and Arguello the bronze. “I had chances to win my singles,” said Perry. “I was 1-0 up and 5-0 in two of the sets so I’m a bit frustrated and disappointed with myself but Laue is a very experienced player and he knows how to play long and important matches. I thought we played great in the doubles; it was just unfortunate that in the fifth set they managed to get a good lead and keep it. I feel it was another match we should have won with the chances we created for ourselves.”

Having reached his first singles final and taken two medals here the 20 year old has made good progress this season.

“It’s been a fantastic tournament for me,” he said, “I’ve picked up some good wins and I think I’ve competed really well. I just need to make sure I push on now and train just as hard as I have been because I’ve seen the results here and the hard work I’ve been doing at home is paying off.”

Welshman Tom Matthews and his American partner Sebastian Defrancesco played their final match in the round-robin men’s class 1 team event today against a Korean/French team and Matthews produced a determined performance to come back from 1-2 down against the Frenchman Cyril Hernandez and take the match 11-4 in the fifth. After losing a tight doubles match 3-2 Matthews took a 2-0 lead against world number seven Hae-kon Lee and came back from 0-6 in the third set to level at 8-8. But the Korean used his experience to take the set 11-8 and despite a brave fight by Matthews Lee took the match 3-2 to clinch the tie for his team. 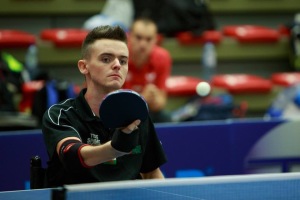 “I was pleased to get another win,” said Matthews, “but I forced things too much and made too many errors so I need to sort that out. It was a good game against Lee. I need to work on controlling my nerves and improving my game generally; my touch play is good but my attack and blocking need to improve and also my serve. It will come in the end. In my last tournament I was beaten 3-0 by Marcus Sieger and I took him close here so it shows I’m coming on and that’s the main thing.”

GB Performance Director Gorazd Vecko was pleased with his young team’s performance. “Overall I’m happy with the performance especially with Ross Wilson coming back in his first international since London 2012 to take gold in the singles, which was very encouraging. Kim Daybell maintained his good form from the Worlds and didn’t lose a set in the singles event, winning the gold medal against some really good players. With two gold medals Megan Shackleton had the best performance of all the athletes here and if she continues working hard she can bring home major medals in the future. Pathway player Billy Shilton showed really good performance and we know what we need to work on with him to make him a world class player. We finished with nine medals, including five golds, and the young players know that if they work hard they have a bright future.”