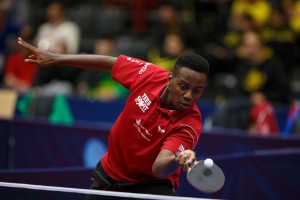 Facey Thompson progressed from his group in men’s class 9 with a 3-0 win over the higher ranked Nigerian Francis Chukwuemeka and a 3-0 win over the French World number 13 Frederic Bellais took him into the semi-final against Dezso Bereczki. The 20 year old Londoner received a walkover into the final when the Hungarian withdrew and he found the World number two Iurii Nozdrunov from Russia on top form in a 3-0 loss.

“I feel I played well,” said Facey Thompson. “To beat Bellais in the quarters was very good and I’m proud of that. In the final my level was not as good and I need to be one step higher but my opponent was very good. I just have to play my table tennis, fight for every point and see what happens in the team event now.”

Matthews topped his group in men’s class 1 and received a bye into the semi-finals. A 3-1 defeat of the Russian Dmitry Lavrov took him into the final against the World number five Young Dae Joo but after winning the first set 11-2 the 23 year old Welshman began to feel the effects of the heat and was forced to retire with the Korean leading 2-1. 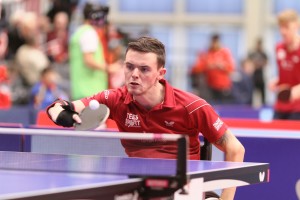 “I had a slow start to the competition but when I started playing my game I felt in control,” said Matthews. “I played well to fight back from 2-0 down against Keller in the group and I felt I played well in the semi-final and came out with a good win over Lavrov. In the final I started off really well, forcing my game on to Joo, but unfortunately as the game went on I over-heated and had to forfeit the match under doctor’s orders. But in a way I’m glad it happened because I’ve learnt a lot about myself again at this tournament and can now work on this to come back stronger in 2016.”

In men’s class 6 Martin Perry progressed to the knockout stages with two wins from three in his group including a 3-2 win over Danny Bobrov the World ranked number 11 from Israel. After a 3-1 win over Junki Itai from Japan he put up a great performance to beat the French World number nine Bastien Grundeler 3-1 in the semi-final. Despite finding the experienced Italian Raimondo Alecci too good in the final the 21 year old from Paisley could be proud of his efforts. “I’m extremely happy with my performance,” said Perry. “To get the competition off to a fantastic start against Bobrov really spurred me on and gave me a big confidence boost. In the quarter-final I felt that my standard had slipped from the previous day but I dug deep to win 3-1 and although I lost the first set against Grundeler in the semi-final 12-10 I knew I was using the right tactics so I dug really deep and battled for a 3-1 victory, which was my biggest ever win. I was disappointed to lose the final 3-0 to Alecci but I feel I played well and despite the score I feel it was a good match. I think I’ve shown the level of player I can be and I am pleased with my results and really looking forward to the team event now.”

Shilton topped his group in men’s class 8 with two wins from two including a 3-2 win over the former World and Paralympic champion Mathieu Loicq from Belgium and he put up another fighting performance in the quarter-final to beat Fabian Rignell from Sweden 11-9 in the fifth. A 3-1 defeat by another very experienced Belgian Marc Ledoux in the semi-final meant that the Gloucestershire teenager had to be content with a bronze medal. “Overall I’m really happy with the way I performed,” said Shilton. “I knew it was going to be difficult but the main thing for me was to keep fighting and not lose my head. In my group I was really happy to beat the Belgian player as he is a top player and was Paralympic champion and to win my quarter final was massive for me after being 8-4 down in the fifth. Now my focus is on the team event and I’m hoping I can keep up my form.”

The competition continues with the team events which conclude on Saturday.