Matthews and Keller began their round robin men’s class 1 team event with a 3-1 win over the top seeds Korea. Matthews, currently World ranked 19, had been forced to retire from his singles final against Young Dae Joo due to heat exhaustion and in their rematch he came back from 2-1 down to beat the Korean World number five 11-9 in the fifth and then clinched the tie with a 3-2 win over World number seven Jae-Kwan Cho.

A narrow 3-2 loss for the 23 year old Welshman against World number nine Yunier Fernandez Izquierdo gave the advantage in their second match to the Cuban/Russian combination and although Matthews and Keller fought back to take the doubles 3-0 Fernandez Izquierdo beat Keller 3-0 to secure the tie for his team. In their final match against a combined team from Finland and USA Matthews beat Matti Launonen 3-0 and combined with Keller to win a close doubles 3-2 and the tie 3-0 which secured the silver medal. “I feel I played well in the team event,” said Matthews. “We knew Korea would be a tough match and I played really well against Joo and it was a battle right to the very end where I clinched the win in the fifth set. It was an overwhelming feeling knowing I’d just beaten a top 10 player. Against Cho I started out a little slow - I was still overwhelmed with my win beforehand - but when I started getting settled I became composed and had a positive attitude. Overall this tournament has been one of my best performances all year; I’m so proud to be part of a great team and can’t wait to get back training in the New Year to get stronger and more consistent.”

Perry lost a very close match to Danny Bobrov in the opening tie against Israel/South Africa but the GB/Netherlands/Belgium combination went on to win the tie 3-1 and followed up with a 3-2 win over Japan2, Perry clinching the tie with a 3-0 win over Junki Itai. That set up a semi-final against Japan1 and a 3-1 win took them through to the final against France in which Perry did not play and Montanus and Despineux were beaten 3-1 by Kevin Dourbecker and Stephane Messi. “I feel that my performance in team wasn’t quite as strong as in the singles,” said Perry. “As the tournament has progressed I’ve really felt it take its toll on my body. However, I’m very happy with my mental strength because even though my body was struggling I still fought for every point in every match for my team and I’m incredibly happy with our final position. To come away from a strong Factor 40 tournament with two medals is a great achievement personally and to get my biggest ever win over the world number nine makes me really excited for the year ahead in 2016.”

Facey Thompson and his Costa Rican team mates began with a 3-1 loss to the combined team of the Austrian Krisztian Gardos and Marcin Skrzynecki from Poland. However, after beating Skrzynecki the 20 year old London South Bank University student, a class 9 player, put up a great performance against Gardos, pushing the class 10 World number ten all the way in a 3-2 loss. The withdrawal of Poland and the combined Hungarian/Japanese team put GB/Costa Rica through to the semi-finals and although the Russian team proved too strong Facey Thompson, who was beaten 3-0 by Iurii Nozdrunov twice in the singles competition, gave the World number two a much tougher match which the Russian eventually won 13-11 in the fourth.

“Against Gardos I believed I could win the match,” said Facey Thompson. “I was fighting for every point and I took him close but his experience came out in the end and he proved that he was the better player in the fifth. I think I played very good table tennis - the best I could have done. Against Nozdrunov I played my hardest - I moved well and wasn’t nervous but played very aggressive with my shots. I came up short against him but I played my best.”

Billy Shilton also teamed up with two players from Costa Rica in the round robin men’s class 9 team event and the 17 year old from Stonehouse got his team off to a great start against Netherlands/Japan with a 3-1 win over Arufuahirokazu Tateishi. However, the experienced class 9 Dutchman Tonnie Heijnen won the tie for his team with a 3-1 win over class 8 Shilton.

The second match against a combined team from Finland and Chile resulted in a 3-1 loss and although Shilton won the first singles of their final match against Shaquille Joel Rivera Vicente 3-0 the Puerta Rican and his Nigerian partner Francis Chukwuemeka won a competitive doubles 3-2 and eventually took the tie 3-1 to leave GB/Costa Rica out of the medals. 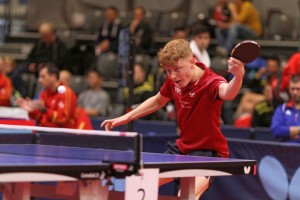 “I thought I played well in the team event,” said Shilton, “but I just found my nerves got the better of me in certain big matches. But overall I feel like I performed well against some top players in class 9. I was 1-1, 10-8 up against a top player in class 9 from the Netherlands so I was pleased with the way I performed in that match and my others. Playing team in class 9 was very challenging but I really enjoyed playing a different variation of players - it was a great experience for me.”

“It has been a good competition,” said GB Performance Director Gorazd Vecko, “and all four GB players have performed well and beaten higher ranked players. We will now have to wait until the updated world rankings are published in January to see how many of our players have qualified to compete in Rio next year.”