Liverpool’s Hunter-Spivey, who turned 21 yesterday, had enjoyed one of the best wins of his career in the quarter-final against the German World champion Valentin Baus, saving six match points against the World number three before winning the fifth and deciding game 15-13. A 3-0 win against Bilal El Baqqali Talibi from Spain then took him through to the final and a rematch against Ali Ozturk, who had beaten him in the group stages yesterday.

Today’s game was much tighter and it was the greater experience of the Turkish World number seven that won the match 11-7 in the fifth but it was nevertheless a great performance by Hunter-Spivey who is progressing all the time. “I’m playing really well,” he said, “and I learnt from the first match we played yesterday. It’s been a tough day and I’ve had some good wins so it is just disappointing that I lost towards the end. I could have done my tactics a bit better than I did but I’ve got to be proud of getting to the final of a factor 40. Baus was an amazing win for me - I managed to save six match points and I didn’t bottle it. I feel that I am a big match player - I enjoy the atmosphere and the big arenas. I’m definitely making progress although not quite playing my best, which is probably the perfect place to be before Rio.”

Wetherill, from Torpoint, had started the day with a 3-0 win in the quarter-final against the Spaniard Alberto Seoane Alcazar, and had then showed great character to come back from 2-0 down against Rungroj Thainiyom from Thailand to beat the Paralympic champion 11-6 in the fifth. That took him through to the final against the World number one Alvaro Valera, who was class 8 Paralympic champion in 2000 and is the current World and European champion in men’s class 6. After edging the first game 12-10 the Spaniard took the second 11-6 and although Wetherill fought back from 3-6 to lead 10-8 in the third Valera took it 12-10 to win the gold. 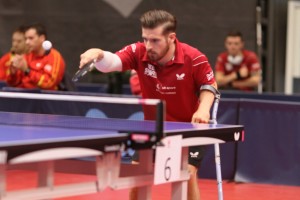 “I just didn’t take my chances,” said 26 year old Wetherill. “I had game points in two of the three sets and to be honest my head wasn’t really there today. I was just a bit fatigued and let my concentration slip a little bit. I just need to be a bit more clinical. I feel as if I’ve played today with my bones stuck together with cement so I’m quite pleased to get to the final but to be honest I’m not really satisfied with that. I always want to win every match I play and it is always disappointing to lose, especially knowing that I haven’t been able to play at my highest level. But it’s encouraging and I know what I need to work on so hopefully in Rio it will be different.”

For two and a half games 23 year old Leeds University medical student Daybell looked the better player in his semi-final against Mateo Boheas, the talented 19 year old from France, and was two points away from winning the match. But the World number six worked his way back into it and eventually won 11-9 in the fifth. 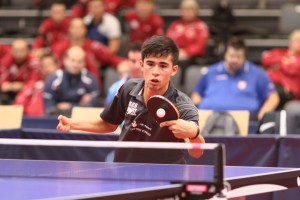 “I played well for the first half of the game,” said Daybell. “I should have nicked it in the third at 2-0, 9-8 up and I think he changed his tactics a little bit and made things awkward for me so it was a shame I couldn’t quite finish him off.  Over the last couple of tournaments I think my level has been high but I lost the last semi-final from 2-0 so I need to be able to knuckle down and find a way to change when they change their tactics. It is not about level - I am clearly playing at the top level with all the top guys - I just need to make a few little tweaks so nothing to worry about.” World champion Bayley looked sharp in a 3-0 quarter-final win against Katsuyoshi Yagi from Japan but could not find his form against Mykhaylo Popov in the semi-final and the Ukrainian former European champion avenged a 0-3 defeat by Bayley in Slovenia last week, beating the World number one 3-1. Although disappointed, Bayley was not too disheartened.

“I felt a bit mentally tired,” admitted the 28 year old from Tunbridge Wells, “but no excuses - he played really well. It has been difficult playing two back-to-back tournaments and quite a lot of pressure to do both and I think it got to me a bit. I lost my head a little bit and although I’m disappointed to lose I can accept it has been a good couple of weeks for me. I’ve beaten everyone I wanted to beat so overall I’m pleased.”

Rob Davies has also looked in great form here and was a comfortable 3-0 winner against Andrea Borgato from Italy in his quarter-final. However, against World champion Chang Ho Lee he struggled to play his game and lost in three close sets. “I just wasn’t able to perform against him (Lee) today,” admitted the 31 year old Welshman. “It is a mental thing at the moment more than anything so that is what I need to work on. We don’t play the Koreans often enough and they play slightly different to other countries. That is why I came here - I wanted to play them as much as I can. No matter what you try and emulate in the training hall it is never the same as competition and mentally I didn’t perform like I can. I’ve lost this one so I have to move on and hopefully play them in the team and try and do the job there.”

Davies’s men’s class 1 team partner and fellow Welshman Paul Davies had earlier played Lee in his quarter-final and the Korean World number six was just too strong in a 3-1 win. “I did better than I thought I would,” said the 49 year old, who is playing in only his second tournament after two years out through injury, “but maybe a lack of match play has caught up with me a bit. I’ve got the skills - I know I can do it and I’m going to do it. He deserved to win today but that game was so nip and tuck it could have gone either way - he was the better player on the day but next time I know I can beat him. I beat him here two years ago and in London but it was his day today.”

Jane Campbell never recovered from a slow start against Mi Giyu Lee from Korea in her women’s class 3 quarter-final and although she fought back in the third game the Asian champion and World team bronze medalist took it 11-9 to win the match 3-0. “I took too long to get going and figure out what was happening,” admitted Campbell. “I have played her before but a long time ago and her style is just something I’ve not come across recently - the speed and the pace just took me by surprise. I think the way I played in the third game shows it is possible for me to do it if I had just played like that from the start. Hopefully I’ll get another opportunity to come up against Korea in the team competition - we don’t see them very often so it will all be good preparation for Rio.” “I didn’t play my level at all today,” said a clearly disappointed Facey Thompson, “I wasn’t in the game at all. I tried to fight but never got into the match. It takes me a while to get going sometimes and I need to make sure I’m in the match from the start as it is hard to get into the match when you are 2-0 down.  I’m looking forward to playing team with Kim (Daybell) - it will be the last time we play together before he goes to Rio so it should be good.”

The tournament continues with the team events that conclude on Saturday.