Barnsley school teacher Gilroy and her team partner Alena Kanova from Slovakia reached the final of women’s class 4 with a 2-1 semi-final win against Brazil. After losing the doubles they needed to win both singles and Gilroy beat Joyce Oliveira, the three times PanAmerican champion, 3-0 before Kanova took them into the final with a 3-1 win over Thais Fraga Severo.

In the final they faced World team champions Serbia and after losing the doubles 0-3 against European champion and World number two, Borislava Peric-Rankovic, and European silver medalist, Nada Matic, they needed to win both singles. Gilroy played a good match against Matic, coming back from 2-1 down to level at 2-2 but it was the World number five who proved just the stronger and she won the fifth game 11-7 to clinch the gold for Serbia. “I’m really pleased,” said 43 year old Gilroy. “It has been a really difficult week - I’ve not really had form earlier on but I played so much better today. The shots that I have been working on are starting to come through.  A 3-0 win against Joyce, who is a really good player, and then to go to the fifth with Matic, who I lost to convincingly the other day, was really good for me. It gives me a lot of positives - a lot of things to work on in the next four months but it shows that I am getting to the standard that I know I can play at to beat these girls.”

In their semi-final 26 year old Wetherill and his Spanish team partner Alberto Seoane beat Chile 2-0, winning the doubles 3-1 before Seoane won the match with a 3-0 win against PanAmerican champion Matias Nicolas Pino Lorca. Against the combination of Paralympic champion Rungroj Thainiyom from Thailand and World number four Hong Kyu Park from Korea in the final they started well but eventually lost the doubles 1-3 and had to settle for silver when Seoane lost in three close games to Thainiyom. 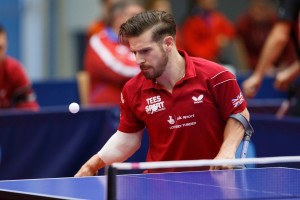 “It’s been a tough two weeks,” said Wetherill, “but I’ve only lost two games against the top two players in the world so it is not a bad performance really. I came here to improve my seeding for Rio and I think I’ve done that so I’ve reached my targets. As I said yesterday I always want to win every match that I play so I’m disappointed in that respect that I’ve lost those matches but they’ve been close and I’ve played well, especially this week, and it’s all good for Rio. I’m pretty confident that with the preparation we’ve got over the next few months the results will be much better for me in Rio.”

In their men’s class 1 semi-final Rob Davies and Paul Davies had to come from 2-0 down in the doubles to beat the German/Swiss combination of Holger Nikelis, the reigning Paralympic champion and former World number one, and the very experienced Sylvio Keller 3-2. However, the effort of doing that appeared to take effect in the singles and after Paul Davies lost 0-3 to an in-form Nikelis, Rob Davies fought hard against Keller but lost in five sets and the Welsh duo had to be content with the bronze.

Although disappointed Davies and Davies insisted that they will come back stronger. “I was really happy with the way we played in the doubles,” said Rob Davies. “To come back and fight like we did and take it 3-2 showed what we’re made of a bit. Unfortunately I couldn’t repeat it in my singles - Sylvio is playing well and I’ve got to give him credit. That’s the way it goes - that is sport and I’ve got to use that as a fighting tool now. The next four months I know I’m going to work my socks off before Rio and I’m looking forward to that fight now to be honest.” “It was a good result in the doubles from 2-0 down,” agreed Paul Davies, “and we did well to get back and win that. Holger played well but I don’t feel I played my best against him as I made a lot of errors. There were some simple shots I missed - I was too eager and jumped in too quick. But that is down to lack of match practice after two years out. The next four months are going to be work, work, work and these results won’t reflect on our chances in Rio as far as I’m concerned. The boys are working us hard back home so the next four months is what it is all about.”

In the third match of their round-robin men’s class 10 team event Leeds University medical student Daybell and London South Bank University student Facey Thompson took on Brazil and fought back really well from 2-1 down in the doubles to beat PanAmerican champion Carlos Alberto Carbinatti Junior and Diego Moreira 11-3 in the fifth. Daybell then clinched the win with a 3-0 defeat of Moreira.

That put them in contention for the gold medal going into their final match against the Czech Republic/Belgium combination of former Paralympic and World champion Ivan Karabec and the precocious talent of 15 year old class 9 European champion Laurens Devos, but a 3-1 loss in the doubles and a 3-1 defeat for Daybell against Devos left them with the bronze. “I felt a bit mentally drained today especially towards the end,” admitted 23 year old Daybell, “but he (Devos) was stronger than me and he played well. Overall I think my level has been high - it’s been difficult coming from Slovenia but I’m pretty happy. I’ve played well over the past two weeks and taken two singles medals and I’ve shown that I’m competing in that top ten bracket in the world so I’m pretty pleased.” “It has been an up and down week,” said Facey Thompson. “I played well in the singles and lost to a strong player in the quarter-finals but it has been mentally tiring and draining for me. If you look around you can be 5-0 down and the game is done and you wish you could start all over again. So if you are mentally tired it is very hard to win matches. I’m going to work on my consistency, my backhand and movement and improve everything for the next season.”

In their final match of the round-robin women’s class 2-3 team event Jane Campbell and Sara Head lost 0-2 to the World team bronze medalists from Korea. Although they lost the doubles 3-0 they were competitive in all three games and the experience of playing the strong Koreans will be valuable before Rio. “It didn’t feel as though we were outclassed,” said Campbell. “I think there are just a few things we need to work on and then we can be very competitive. It has been good finding out exactly what I need to work on and nice to know that I am going to have a lot more training time than I’ve had over the last few months so it is all positive.”

Head lost the singles to Jiyu Yoon but was also able to reflect positively on her performance.

“This is the first time we’ve played that combination,” she said, “so it was very good for us to play against them and they put their A team out against us today. Doubles will be very important in Rio so we will work on that but we are going to work on everything over the next four months. We can see the positives from what we have been working on - it is just about being more consistent now.”