World champion Will Bayley is assured of a second medal at the 2014 ITT Para Table Tennis World Championships after he and team partner Paul Karabardak reached the semi-final of the men’s class 6-7 team event with a determined 3-1 win over the Czech Republic in their final group match. Earlier in the day Bayley and Karabardak were involved in a great battle with Spain. Men’s class 6 world champion Alvaro Valera gave the early advantage to the Spanish by beating Karabardak 3-1 but Bayley levelled the tie with a 3-0 win over the class 7 world number four Jordi Morales. The doubles went to a fifth set and the luck was with the Spanish as after some great rallies they clinched the match 11-9 with a shot that hit the net and just dropped over. Although Bayley beat Valera 3-0 to level the tie again Morales, silver medalist in the singles four years ago, was too strong for Karabardak and won the tie for Spain with a 3-0 victory.

This left the GB pair needing to beat the Czech Republic and with the tie level at 1-1 after the first two singles it was crucial to win the doubles. It went to a fifth set but Bayley and Karabardak combined superbly and with five match points in hand Karabardak sealed the win with a great forehand. Bayley then beat Daniel Horut 3-0 to secure the tie for the GB pair and take them into tomorrow’s semi-finals in which they will play the top seeds Ukraine. “It was really difficult to pick ourselves up after losing to Spain in the morning,” said Swansea’s Karabardak, “because we had big chances and we didn’t do much wrong they just had the luck. We only had an hour and a half to rest before our next match so to play tired after a big loss and to come through that match and win that doubles in the fifth set was good. It was nice to win the doubles and then for Will to finish it off. To be guaranteed a medal now is really special for me because I’ve never won a World Championship medal before.”

“I knew the Czech pair would be good at doubles,” said Bayley, “and I knew it was going to be a tough match but I was really pleased with the way we played in the last set - we came together and held our nerve under pressure - because it would have been a pressure fifth match if we had lost the doubles. I fancied Paul to win it anyway but I wouldn’t like to play in that position.

“I’m delighted to get two medals - that’s what I always come to do in the major championships and I’ve done that again here. We’ve got a free match against Ukraine; I don’t really feel any pressure in that match - they are big favourites but we can just play free and enjoy it. They are the best team in the world but they are there to be beaten - I’m not scared to play them and I know Paul’s not scared so we’re looking forward to it.”

Kim Daybell and Aaron McKibbin began the day with their second group match in the men’s class 9-10 event against Japan and McKibbin, a class 8 player, made a great start in the first singles against the class 9 Koyo Iwabuchi to go 2-0 up. The Japanese player came back to level at 2-2 and the momentum seemed to have swung Japan’s way when McKibbin went 1-4 down in the fifth and deciding set. A timeout called by the GB coach Matt Kenny helped to halt the slide but at 6-9 down the Londoner was two points from defeat. He responded brilliantly to take the next four points and then showed great resolve to finally clinch the set and the match on his eighth match point 18-16.

Daybell then recorded a comfortable 3-0 win against the class 10 Nariaki Kakita before combining well with McKibbin to win the doubles 3-0 and secure the tie 3-0.

They then had a tough match against Ukraine who had beaten the top seeds Poland in the morning. McKibbin made a bright start against Yurty Shchepanskyy and pushed the class 9 world number three all the way in the first two sets in a 0-3 loss. Daybell then faced the class 8 world champion Victor Didukh who had provided one of the shock results of the tournament earlier by beating the class 10 gold medalist and world number one Patryk Chojnowski. The Ukrainian was a very good able bodied player before losing a leg to cancer and at 0-1 and 2-7 Daybell looked out of it but he responded superbly to take the second set 11-8 and the third 11-9 and although Didukh levelled at 2-2 the Sheffield medical student held his nerve and took the match 11-8 in the fifth.

The greater experience of the Ukraine pair was decisive in the doubles and although Daybell then beat Shchepanskyy Didukh sealed the tie for Ukraine with a 3-0 win against McKibbin which meant that the GB pair finished third in their group and missed out on a place in the knockout stages. 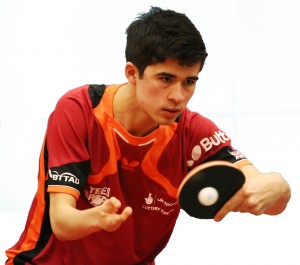 “It was really tough to play Didukh,” admitted Daybell, “he plays a very clever game and even though he is class 8 he makes life very difficult. There was one stage when I was really down and out but I was pleased I managed to find a way through and win the match. I’ve learnt a lot this week - we are still a developing team and we’re still young and I feel that we came here and really gave it our best shot. Aaron played really well because competing in class 10 is really difficult for a class 8 but he showed he is good enough to play so it was good. It’s definitely given me confidence for the future; there have been times this season when I’ve thought that mixing table tennis and studying might be quite difficult but having had a good block of training before this tournament I’ve proved to myself that I can compete at the highest level. I’ve only lost two singles matches here to the two best players in the world so I can’t really complain.”

“I played well this morning,” said McKibbin. “It was a difficult match and the Japanese player was a lot better than his ranking. I felt uncomfortable in all the sets even when I was 2-0 up so I knew it was tough and I was thankful to come through it. I’ve learnt a lot this week - I know I can compete with the best when I’m on top form. It was a disappointing way to finish - I can take positives but there is still a long way to go. My game definitely feels like it’s moving forward but at the same time I know there is a lot more improvement I need to make to get to the level I want to be at - which is taking medals and playing in finals.”

After losing their first group match yesterday Paralympic bronze medalists Jane Campbell and Sara Head needed to beat Croatia to keep their hopes of progressing to the knockout stages alive but they went into the doubles 0-2 down after Campbell lost 3-1 to Andela Muzinic and Head was edged out 12-10 in the fifth by Helena Dretar-Karic. The GB pair fought back bravely from 2-1 down to take the match 11-9 in the fifth and when Head took the first set against Muzinic the momentum seemed to be with the Welsh player but the world number four came back strongly to take the next three sets 9, 8 and 6 and secure the tie for Croatia.

Although the GB pair beat France 3-0 in their final group match it was not enough to take them through to the semi-finals.

“It was a really close game against Croatia,” said Head, “and we were obviously disappointed to lose. We then just really wanted to win the match against France more than anything so it was important to us but we wanted to enjoy it and relax. We didn’t have any pressure this afternoon. Every game we play, every match, every competition is all new experience and I think this is an experience we are going to learn from and hopefully it’s going to make us stronger in the future.”

“It was difficult having lost such a close first match,” said Campbell, “but you just have to get on and do it. It was nice to finish on a win.”