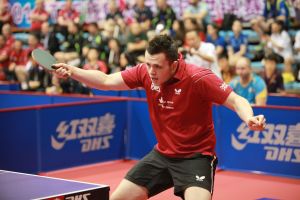 Londoner McKibbin topped his group with three wins from three and received a bye into the quarter-finals where he beat Josef Krsiak from Slovakia 3-2. In the semi-finals he faced the World champion and World number one Viktor Didukh and the Ukrainian was too strong in a 3-0 win.

Davies also topped his group and received a bye into the quarter finals. He led Nam 2-0 and had match points in the fifth set but could not convert them and the Korean edged the set 12-10 to win the match 3-2.

Fellow Welshman Karabardak, gold medalist in Slovenia last week, won his group and played a great match to beat the World number six Bastien Grundeler from France 3-0 in the last 16. He was then unlucky to come up against Valera in the quarter-finals and the Spaniard showed all his class in a 3-0 win.

Hunter-Spivey progressed to the knockout stages with two wins from his three group matches and beat Agus Sutanto from Indonesia 3-1 in the last 16 to set up a quarter final against Urhaug but the experienced Norwegian was always in control and beat the 20 year old 3-0.

Ashley Facey Thompson (men’s class 9) also progressed from his group with two wins but found the Japanese player Nobuyuki Suzuki too good in their last 16 match in a 3-0 loss.

Thomas Matthews (men’s class 1) had a tough group with the world number two Jean-Francois Ducay from France and Nam and although he lost to both players he came very close to beating Nam, fighting back from 0-2 to level at 2-2 and losing a tight fifth set 11-9.

Martin Perry (men’s class 6) was also knocked out at the group stages but played well in 3-1 defeats to Grundeler and the world number 10 Alberto Seoane Alcazar from Spain and recorded a 3-0 win over Jaun Carlos Sepulveda Pardo from Chile.

The competition continues with the team event that concludes on Saturday.