Karabardak has grown in confidence since being reclassified as a class 6 athlete this year and he topped his group with a 3-0 win over Mars Gabdullin of Russia and a determined performance against Bobi Simion of Romania, clinching the match 12-10 in the fifth in a repeat of their final in Hungary. A 3-0 win against Vjekoslav Gregorovic of Croatia took him into a semi-final against Alexander Esaulov of Russia and he beat the world number nine 3-0 to set up a final against Simion. This time it was the Romanian who took the honours in four close sets 12-14, 12-10, 11-9, 12-10 and the Welshman had to settle for a well-deserved silver medal. Campbell beat the Korean Sun-ja Kim and came back from 2-1 down in a hard fought 3-2 win over Kezban Kakir of Turkey. A 3-1 loss to the Frenchwoman Fanny Bertand left her in second place in the group which sent her through to the knockout stages. A 3-1 win in the quarter final over Hatice Duman of Turkey took her into a semi-final against Michela Brunelli of Italy. After losing the first two games the Londoner came back to take the third but the world number seven held on to take the match 14-12 in the fourth. 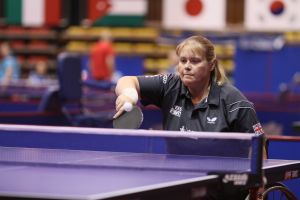 Barnsley’s Gilroy topped her group with three wins out of three and a 3-1 quarter final win against Nada Matic of Serbia took her into a semi-final against her old adversary Borislava Peric-Rankovic in a repeat of their dramatic World Championship semi-final last year that Gilroy had won 3-2. Gilroy made a great start, taking a close first set 14-12, but the Serbian world number one came storming back to take the next three sets and the match 3-1. Despite two losses in his group Jack Hunter-Spivey progressed to the knockout stages on countback. In the quarter-finals he faced the French world number seven Gregory Rosec who had not dropped a set in his three group matches but the 19 year old from Liverpool produced his best form to win 3-0 and go through to a semi-final against Ehab Fetir. It proved to be a great battle with Hunter-Spivey leading 2-1 but the Egyptian fighting back to take the match 11-9 in the fifth and go on to take the gold medal. 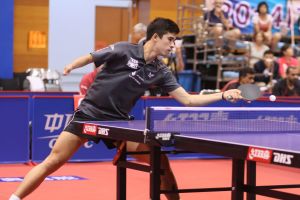 Daybell came through his group comfortably with wins over the Brazilian Claudio Massad, Igor Misztal of Poland and Filip Radovic of Montenegro and then beat Nariaki Kakita of Japan 3-0 to set up a semi-final against Pavel Lukyjanov. The experienced Russian took a 2-0 lead and although Daybell fought back to take the third set 14-12 Lukyjanov clinched the match 12-10 in the fourth and went on to take the gold medal.

Although out of the medals Tom Matthews (class 1), Ross Wilson, Aaron McKibbin (class 8) and Ashley Facey Thompson (class 9) all came through their groups and reached the quarter finals. Matthews started with a great 3-2 win against the world number eight Andrea Borgato from Italy and despite a narrow 3-2 loss to the experienced Sylvio Keller from Switzerland he progressed from the group to the quarter-finals. Another battling performance against the Korean Ki Won Nam just failed to take him into his first factor 40 semi-final as the world number ten came back from 2-1 down to take the match 11-6 in the fifth. It was nevertheless a great performance by the Welshman who is improving all the time. 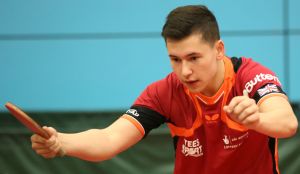 Sheffield based Wilson’s world ranking has dropped from two in 2012 to 16 after a two year absence through injury but the 19 year old from Minster is determined to make up for lost time and 3-0 wins against the Belgian Marc Ledoux, Marius Olczak of Poland and the Russian Artem Lakovlev took him through to a last 16 match against another Russian Aleksei Saunin. A 3-0 win earned him a quarter final against Piotr Grudzien but the world number six from Poland proved too strong in a 3-0 win. Sheffield based McKibbin also came through his group with wins against Mathieu Loicq of Belgium, Aleksei Saunin and the Norwegian Steffen Salomonsen. His reward for a 3-1 win in the last 16 against Niklas Andersson of Sweden was a quarter-final against world champion Victor Didukh and the Ukrainian world number one was always in command in a 3-0 win. Facey Thompson started with a tremendous 3-2 win over the world number three Yuriy Shchepanskyy, holding his nerve to win 11-9 in the fifth after the Ukrainian three time European champion had come back to level the match at 2-2. Another tough match against Koyo Iwabuchi of Japan in which Facey Thompson fought back from 2-0 down to win 11-5 in the fifth gave him a bye into the quarter-finals as group winner but the 20 year old Londoner lost out 3-1 to Frederic Bellais of France who went on to win the gold medal.

The tournament continues with the team event that concludes on Saturday.