This was the first time that Para events had been included in the ETTA Senior Nationals with four events played in a round-robin style format. In men’s class 9-10 Daybell started with 3-0 wins against Craig Allen and Shae Thakker and clinched victory in the event with a 3-0 win over GB team mate Ashley Facey Thompson, who had also recorded 3-0 wins against Allen and Thakker.

Daybell had earlier put up a great performance to reach the quarter-finals of the men’s singles with a battling 4-3 win against England international and 10th seed Helshan Weerasinghe in the last 16.

“I think it has been a good day,” said the 23 year old, who has taken a year out of his medical studies to prepare for Rio. “I’ve shown there is a gap that is being bridged between Para and able bodied table tennis. I played pretty much to the best of my ability, especially in the last 16 match. I had my chances in the quarter final as well and to finish in the top eight in the able bodied Nationals is pretty good. I’m training with able bodied players every day and I’m starting to get up to speed.  I feel like having a year when I can train full time is really good and that has shown today.” All four athletes in the men’s class 6-8 event have been named in the ParalympicsGB team for Rio, with 20 year old Wilson beating fellow class 8 athlete Aaron McKibbin, class 7 World number one Will Bayley and class 6 European medalist David Wetherill to finish top.

“I was reasonably pleased,” he said. “I didn’t play that well but it is a case of coming here and getting the job done and I think I did that. This is one of the first competitions I’ve played since I’ve been working on a lot of technical things in training and I tried to incorporate a lot of that into my game. That was quite an important thing for me today and I managed to get the results so I was happy with that.” “I played much better than a couple of weeks ago at the BTTAD Nationals,” said Gilroy, “everything was flowing well today. I’ve been competing every weekend for the last four weeks - I played in the county championships last week for the able bodied team and won a couple of matches 3-0 and only lost in the other two in the fifth so it has been a really good month for me.” 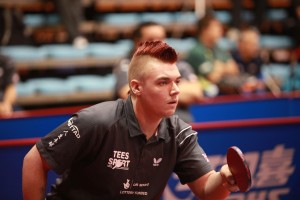 Hunter-Spivey began with a 3-1 win against Dan Bullen and was then pushed all the way by the very experienced former National champion Kevin Plowman. The 20 year old from Liverpool was 4-1 down in the final set but fought back to win it 11-9 and the match 3-2. A 3-0 win against Nicko Anderson then secured him first place in the men’s class 3-5 event.

Full results are available at http://tabletennisengland.co.uk/pg-mutual-nationals/