World champion Will Bayley made smooth progress into the knockout stages of the men’s class 7 singles on a busy first day at the ITTF PTT European Championships in Vejle, Denmark and there was plenty more for the GB team to cheer about with 10 athletes all recording at least one win. Bayley was given a tough first match by Samuel Shur from Israel and was pleased to come through in three close sets. He then beat Ben Despineux from Belgium 3-0 to finish top of his group and ensure his progression to the knockout stages.

“I actually think I was playing really well,” said the 27 year old World champion. “My coach said the first match wasn’t quite as good as I can play but he was really pleased with the second match because I stayed focused throughout and was quite clinical. There are so many good players now and you don’t want anyone to pick your pocket so you have to be on top of your game from the start. I try not to think too far ahead in majors - I just take every match as a final. That’s what I’ve done over the years and I’ll stick with that.” European champion Rob Davies was presented with a walkover in his first match after the withdrawal of the German Marcus Sieger and then had to handle a long delay before his second match but the Welshman finally began the defence of his title with a 3-0 win over Matti Launonen from Finland.

“It was quite frustrating hanging around and then having my second match delayed,” admitted Davies, who plays his final group match tomorrow against Federico Falco of Italy. “My first match was a bit shaky - it just took a bit of time to get the feeling for the ball so I’m pleased to have won it really and to win 3-0 was even better. I can definitely improve from the match although in practice I’ve been playing well and feeling really good. So reasonably happy with the way things are at the moment.” Davies’s class 1 team partner Tom Matthews made a great start to his first major championship by beating the world number 11 Andrea Borgato 3-0. Afterwards the 23 year old Welshman admitted that winning a close first set 13-11 against the experienced Italian was the key to his impressive performance.

“Taking that first set was very important,” he said. “It settled my nerves and from there I kept my composure and kept it simple. It was a really tough match he is so awkward to play. I’ll just think about my next match now - hopefully I can win that and top the group.” “It’s great to be back in this environment,” said 20 year old Wilson, who has endured a frustrating series of injuries over the past three years. “My first match was against a talented young player from the home country so that was tough to deal with and then I wasn’t expected to win against Csejtey as he was the higher ranked player so I’m really pleased. “

Wilson’s class 8 team partner Aaron McKibbin got the GB team off to a great start with a 3-0 win over Marius Olczak from Poland and then put up a fighting performance against Andras Csonka from Hungary, taking the World number five to five sets before eventually losing 3-2. 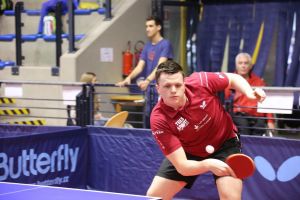 “I’m obviously disappointed to lose as I had a good opportunity,” said McKibbin, “but there was a stage where I was out of the game and I feel like I did quite well to come back into it. I feel that I am getting closer to him - he is a player I do really struggle against and I think I put up a much better performance here than I did last time I played him in Germany so I can take the positives from that.”

Both Wilson and McKibbin play their final group matches tomorrow and while Wilson is in pole position to qualify from his group McKibbin can still go through if he beats Max Van Amerongen from the Netherlands. In men’s class 6 Paul Karabardak also topped his group with two 3-0 wins against Valentin Kneuss from Switzerland and then the Croatian Pavao Jozic.

“I think I played as well as I could play today,” said the 30 year old from Swansea. “I played a tricky opponent in the first game so to beat him comfortably and play well was good. Then against a good player who has had some good wins this year I knew it would be a hard game but I played better than I expected and although he played well I had a bit too much which was pleasing for me.”

Karabardak’s team partner David Wetherill also won both his matches today including a battling 3-1 win against the talented Spaniard Alberto Seoane in which he showed great character to come back from 6-1 down and win a tense fourth set 15-13.

“I was really pleased to win both my matches,” said Wetherill, who plays his final group match tomorrow against the Russian Dinar Safiullin. Billy Shilton could not have had a tougher introduction to his first major championship taking on men’s class 7 World number two Maksym Nikolenko in his first match. But the Gloucestershire teenager, who turned 17 last Friday, is an exciting talent and pushed the Ukrainian all the way in a 3-1 loss.

“I was quite nervous with it being my first major,” said Shilton, “but to take someone as good as Nikolenko quite close I’m happy with the way I played today. To be around so many good players and playing against top players is really good experience for me. I play my second match tomorrow and hopefully I can keep my form from today and win that.”

Shilton can go through to the knockout stages with a win against Michal Deigsler from Poland tomorrow.

In the combined women’s class 4-5 singles World championship silver medalist Sue Gilroy had to use all her experience to beat Aleksandra Vasileva from Russia in five sets and then recovered from losing the first set to beat Zorica Popadic from Serbia 3-1.

“I played probably about 50% today of how I can do,” said Gilroy, who will play her final group match against the Austrian Helke Koller tomorrow. “The wins are the important thing but I’m really disappointed that I haven’t kicked into the gear I need to and play as well as I know I can. Sometimes I put myself under too much pressure and I don’t know how to change that but I will try and start playing my game tomorrow.” 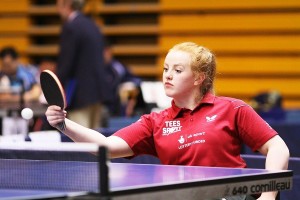 Making her major championship debut 16 year old Megan Shackleton had a tough first match against the three time class 5 European champion Ingela Lundback from Sweden and had chances to win the second set in a 3-0 loss. In her second match she beat Barbara Meglic from Slovenia 3-0 and can progress to the knockout stages if she beats Nada Matic from Serbia tomorrow.

“I think today I played really positively and brought out my best talents,” said Shackleton. “I’ve just played with confidence - I’ve got nothing to lose and I’m really excited to take on everyone. I’m really enjoying it because I’ve never experienced anything like this before and it is on a similar level to a Paralympics which is what I aim to do in the future. Hopefully if I play like I can tomorrow then there is no reason why I can’t get out of my group.”

Although Ashley Facey Thompson started well against Cedric Cabestany from France he found himself 2-0 down to the men’s class 9 World number five. He fought back to take the third set and competed well in the fourth but the Frenchman took the set 11-9 and the match 3-1. Nevertheless Facey Thompson can take plenty of positives from the match and can still progress to the knockout stages if he wins his final group match tomorrow against Tonnie Heijnen of the Netherlands.

“I was playing well and I don’t know what happened,” said the 20 year old Londoner. “He had a couple of net cords and that put me off a bit. I tried but I couldn’t get back in the game so I’m disappointed. I’ll keep on fighting in my next match - I thought I could have beaten Cedric today but he’s a good player and very experienced.”

Jack Hunter-Spivey also had a difficult start to his European Championships campaign in men’s class 5 against Nicolas Savant-Aira and the Frenchman was too strong in a 3-0 win. The 20 year old from Liverpool now has to beat Hamza Caliskan from Turkey tomorrow to keep his singles hopes alive.

“Difficult first match for me and disappointed with the result,” said Hunter-Spivey. “He played well but I didn’t play my best - I wasn’t brave enough on my shots and a bit passive. Tomorrow will be a good match and I hope I can win. I feel like I’m playing quite well - not quite clicking just yet - so I’ll refocus and tomorrow I should be ready to go.”

Campbell then kept her hopes alive with a determined 3-1 win over Kezban Cakir from Turkey and a win tomorrow against the Austrian Doris Mader would take her through to the quarter-finals.

“I feel I’m playing well and that is all you can do,” said Campbell. “Disappointed with the one I lost but I know that I played quite well. I struggled a bit with returning her serves and a few other things that I know I can work on and hopefully do better next time. I have beaten Doris before so I have a good chance - I’ve just got to play my best.”

Head fought back from 2-0 down against another Turkish player Hatice Duman to level at 2-2 but lost the deciding fifth set 9-11. She plays her final group match tomorrow against Michela Brunelli of Italy.

In men’s class 10 Kim Daybell came up against an in-form Denislav Kodjabashev and the Bulgarian World number five was too strong in a 3-0 win. Daybell plays Igor Misztal of Poland tomorrow for a place in the quarter-finals.

“He played a good game and never gave me a chance to get into it,” admitted Daybell. “I didn’t play as well as I can play and I’ll just have to come back tomorrow and try again.”