Paralympic team bronze medalists Aaron McKibbin and Ross Wilson laid to rest the memory of GB’s narrow semi-final defeat by Poland in London 2012 by beating the men’s class 6-8 Paralympic champions in their first match of the men’s class 8 team event today at the European PTT Championships in Vejle, Denmark.

It was a good start to the team event for the GB team with Will Bayley and Billy Shilton beating World champions Spain in men’s class 7 and Paul Karabardak and David Wetherill assuring GB of at least a bronze medal in men’s class 6 by topping their group to reach the semi-finals.

The team event here is being played in the new format that will be used at the Paralympic Games next year with best of three matches instead of the previous best of five. Each tie begins with a doubles and is then decided by two singles matches. McKibbin and Wilson are playing together for the first time in a major since London and only the second time in three years owing to Wilson’s injury problems. They could have hoped for an easier first match than Poland but they got off to a great start by winning the doubles 3-0 and Wilson then secured the win with an impressive 3-0 defeat of the World number four Piotr Grudzien.

“Obviously losing 3-2 to them in London was the hardest result we’ve ever had as a team,” said McKibbin, “so it was really nice to beat them. In the doubles we were really solid and Ross played a perfect game in the singles.” 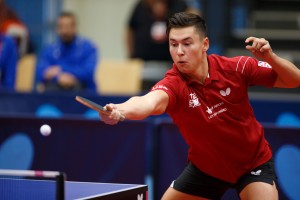 “It was a great win,” agreed Wilson. “It was really hard that day in London and I think all of us have been thinking about getting some revenge since then. I played Grudzien in Italy in March and lost comfortably 3-0 but since then I’ve been working hard on my game and I think I brought that into the match today and I’m really happy to get the win against him because he is a good opponent.”

McKibbin and Wilson play Denmark at 09:00 tomorrow and a win will take them into the afternoon’s quarter-finals as group winners.

Bayley and Shilton defeated Spain to win gold in Slovenia earlier this year but they lost the first set of the doubles to the World champions before recovering to win the match 11-7 in the fourth. Bayley, the class 7 World number one, faced Alvaro Valera, the class 6 World number one, in the first singles and the Spaniard showed all his class to take a 2-1 lead. But Bayley dug deep and came back to level at 2-2 and then clinched the match 11-6 in the fifth to win the tie 2-0.

“It was difficult to pick myself up after yesterday,” admitted Bayley, “and playing Valera in my first singles match wasn’t ideal because you have to think so much against him and play so clever, so it was a really tough match. We expect so much from ourselves and sometimes we have to be happy with that sort of win - we know we can play better but they are the World champions so they are a very good team.”

“I think we were a bit nervy in the first set,” said Shilton, “because we tried to play them the way we played in Slovenia but it wasn’t really working that well. We knew we had to change things and we did so I think we did quite well to win that match in the end.”

Bayley and Shilton also play Denmark tomorrow in their final group match and a win will take them into the semi-finals.

Rob Davies is defending his European team title in men’s class 1 and with Paul Davies still recovering from injury he has a new partner in Tom Matthews. The pair made a slow start in their first round robin match against Italy losing the first set of the doubles before recovering to win 3-1 and Davies then secured the tie with a 3-0 win against Andrea Borgato.

“I haven’t had much time to think about my win yesterday,” said Davies, “I knew I had to come here today and do the job with Tom - he’s chasing after his gold medal now. I’m really chuffed with the doubles - it’s our first major together so it was good to win the doubles because Italy practise together a lot and are always a tough team to beat in the doubles.”

“I think in the first set we just sat back a bit too much,” said Matthews. “We needed to focus and get back in the game and in the end it came quite naturally to us. It was a great win for us. We’ll take it one match at a time but hopefully we can defend the title.”

Davies and Matthews play Hungary tomorrow and Germany on Saturday. In men’s class 6 Paul Karabardak and David Wetherill began with a comfortable 2-0 win against Russia, Karabardak beating Dinar Safiullin 3-0 after combining with Wetherill to win the doubles. Their second group match against Croatia was much tougher for the GB pair. A hard fought 3-2 win in the doubles was followed by defeat for Karabardak against Vjekoslav Gregorovic which meant that Wetherill needed to beat Pavao Jozic in the deciding singles. After losing the first set the 25 year old fought back well to win the match 12-10 in the fourth and take his team into tomorrow’s semi-finals.

Sue Gilroy and Megan Shackleton also began with a 2-0 win against Israel, taking the doubles in three close sets before Gilroy defeated Chagit Brill 3-0. They then faced the number one seeds in their group from Serbia and after losing the doubles 3-0 the first singles featured another battle between Gilroy and Borislava Peric-Rankovic . The World number two won the first two sets and although Gilroy came back to take the third and had points to take the fourth it was the Serbian who took the match 3-1 and the tie for Serbia 2-0.

Gilroy and Shackleton must now beat Germany tomorrow to progress to the semi-finals. In men’s class 10 Kim Daybell and Ashley Facey Thompson had a tough first match against Spain but played a great match in the doubles coming back twice to level the match and again from 5-2 down to 9-9 in the final set before the experience of the Spaniards proved decisive in taking the set 11-9 and the match 3-2.

Daybell started well against Jose Ruiz but the World number three was on his best form and took the match 3-0 and the tie for Spain 2-0.

“It was a very good doubles match,” said Facey Thompson. “We were unlucky not to beat them but we did our best. Just a few points either way and we could have beaten them.”

Daybell and Facey Thompson can still progress to the quarter- finals if they beat the Czech Republic in their final group match tomorrow.

“I’ll just try and keep fighting,” said Daybell. “We’ve got a good chance against them tomorrow - they are not such a strong team so we’ll see what we can do.”

In the round robin women’s class 1-3 event Jane Campbell and Sara Head started well in their tie against France by taking the doubles 3-0 and Head was 2-1 up against Fanny Bertrand before the tenacious Frenchwoman responded by winning the next two for a 3-2 win. That left Campbell needing to beat the former Paralympic, World and European class 2 champion Isabelle Lafaye and she survived a spirited come back from the World number four to win 12-10 in the third and secure the tie for GB.

Their second match against Turkey also went the distance with Turkey winning the doubles 3-0 and Campbell levelling the tie with a 3-1 win over Hatice Duman. In the deciding singles against Nergiz Altintas Head had her chances but was edged out 15-13, 16-14, 11-9 with Turkey taking the tie 2-1.

“It was a mixed bag for us on day one,” said Head. “We had some excellent games, winning against France this morning and then a very close loss against Turkey. Tomorrow we are going to come back fighting for our next match.”

Campbell and Head can still challenge for a medal if they win one of their final two matches against Italy tomorrow and Croatia on Saturday.