Following two major international competitions in Slovenia and Slovakia GB Para Table Tennis Team Performance Director, Gorazd Vecko, is happy that his team is on track for the Paralympic Games in September. 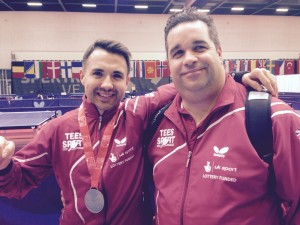 “Over the last two tournaments the athletes have shown great performance,” said Vecko. “Head coach Greg Baker and I are very happy with them because everyone had some brilliant wins and great results. Will Bayley taking gold in Slovenia - beating everyone who will be in Rio apart from two players; Rob Davies also taking gold and Paul Davies coming back from two years away to take silver. This was really important because Slovenia was one of the strongest tournaments yet in Para table tennis and we had eight medals and five in the Paralympic events.

“In Slovakia, Sara Head beating the former Paralympic and World champion Alena Kanova for the first time and Jack Hunter-Spivey beating World champion Valentin Baus from Germany - what this tells me is that all the players are on track and we have a big chance to take medals in Rio. David Wetherill and Jack Hunter-Spivey reached the finals in Slovakia and it was encouraging to see that when our top players did not reach finals other players stepped up, so this shows the strength of our programme.”

Vecko acknowledged that the last month has been a mental and physical challenge for the athletes with back-to-back tournaments.

“It was tough for the athletes,” he said. “Some have been away for one month and some for three weeks and for the Paralympics they will be away for a similar time so we needed to see how they can cope and see how they do. At the end of Slovakia some players were physically and mentally exhausted - this is where we need to prepare them better over the next three and a half months.

“We have a lot of training camps planned - we will bring sparring partners to Sheffield and at the end of July we have a big international training camp in Slovenia which will give us the opportunity to have some match practice as for most of the players Slovakia was their last competition before Rio.

“The standard of competition is going up year by year and we need to keep improving so we need to do things to bring our athletes to a better standard. I will never say we will take medals because there are great players around the world and all the countries are working hard. But I will say that it will be difficult to beat GB in Rio and all the GB players will be the best prepared they can be.”