Saturday, September 6: Another hazy morning and the air is very warm and humid as we make our way from the accommodation block to the hall at 08.45. We are training in the competition hall this morning and head coach Greg wants a short, sharp session from the players. 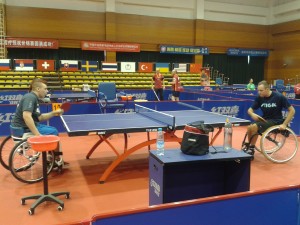 Jack is training again with Tommy Urhaug and former seven time Paralympic medalist Neil Robinson is practising with Sue, then Sara and Jane, giving them the benefit of his many years’ experience. Greg is helping Rob - firing balls at him with relentless regularity which he barely has time to return before the next one arrives. The standing players are alternating - Will and Paul, Aaron and Kim then Paul swapping with Kim - to keep their session fresh. Matt then hits with Will, who would practice all day if he could. Gorazd watches everything and misses nothing. It’s a great session and the players are full of energy and enthusiasm.

Back in the accommodation block familiar faces are arriving from the Netherlands, Italy and Ukraine. With more than 300 athletes from 46 countries here the sense of anticipation is now growing.

With no scheduled practice in the afternoon the players are able to choose when they train. Under instructions from Gorazd and Greg they train for just an hour. All the hard work has been done over the past few weeks in training camps in Sheffield and Slovenia and now it is just a case of keeping the players sharp and mentally ready for the start of the competition. It is a happy team, which is a good sign with two days to go before a major championship.

Tomorrow we will get the draw for the group stages of the singles and the players will find out who their first opponents will be. In the evening the Opening Ceremony will herald the start of the 2014 World Championships and the waiting will finally be over.