Wednesday, September 10: There is an air of anticipation in the air this morning and not a little nervous excitement. Today is the day we will find out whether the long hours in the training hall will bring success at the World Championships. We are assured of two medals but will they be gold and will Rob and Jane add to our total?

It feels a bit cooler outside as we head over to the hall after breakfast. Physio Jill was up early this morning to help Jane and Rob prepare for their quarter finals. The first matches start at 09.30 and the atmosphere is already building as teams and supporters noisily cheer on their players. The German team in their bright green are out in force to support two of their players but there is no sign yet of the bright yellow Aussie kangaroo - perhaps he has taken the day off to go sightseeing in Beijing. Our first match is at 10.10. Jane is taking on the world number two and reigning world champion from China, Qian Li - a formidable challenge but Jane has been so focused and determined since she arrived here and we know she will give it everything.

The Aussie kangaroo has arrived and is sitting in front of one of our flags - it would be nice to think he is supporting GB now but he is actually just looking for the best position from which to watch the Aussie player Melissa Tapper taking on Yang from China.

Jane’s match is underway; Li clearly means business and races through the first set 11-3. Jane rallies and takes the lead in the second but it is short-lived and Li asserts herself and takes the second 11-6 and the third 11-2. So Jane’s singles challenge is over but she can be very proud of the way she’s played and will be back with Sara tomorrow in the team competition.

It is now time for Will’s semi-final and Rob’s quarter-final. It is hard to know where to look - both matches mean so much. Will makes a great start against Popov, the giant Ukrainian who beat him in the European final last year, and takes the first set 11-7. Rob also takes the first set against Lima - so far so good.

Will is playing really cleverly against Popov, playing the ball short and without much pace so that the world number three doesn’t have the opportunity to unleash the powerful shots that are such a major part of his game. At 10-6 it is looking good but when Popov pulls it back to 10-8 Gorazd calls a time out for Will. It proves to be well-timed and Will takes the next point and the set 11-8.

Meanwhile Rob is engaged in a great battle with Lima for the second set and the Brazilian takes it 14-12 to level the match.

In the third set Will recovers from 0-5 to reach 10-8 and has two match points. We hold our breath as Popov serves - it hits the net and trickles over but his next serve forces an error from Will. Popov saves the second match point but Will has another at 11-10. The tension mounts as the umpire gets up to wipe the table and Popov levels at 11-11 then saves another match point at 11-12 before taking the set 14-12. Will walks back to Gorazd and we hope that the loss of four match points will not prey on his mind.

Thankfully Rob takes the third set against Lima 11-8 to calm our nerves a little but when Will goes 3-7 down in the fourth set we worry that he may have missed his chance. But in typical Bayley fashion he comes storming back to level at 7-7 then take the lead for the first time at 8-7. However, Popov is also a determined competitor and he moves to 10-8 with two points to take it into a fifth. Will holds his nerve and at 11-10 he has a fifth match point. Can he do it this time? YES!!! He roars in triumph and races to embrace Gorazd as we jump to our feet to applaud him. He’s into the final and a glance at the next door table tells us that Nikolenko and Montanus are locked at 2-2 in the other semi-final.

We quickly turn our attention back to Rob who having been 3-4 down in the fourth has taken control and he shouts with celebration as he takes the set 11-7 and completes a 3-1 win. He’s assured of a medal now but that won’t be on his mind as he only wants gold. Sue looks pensive as she talks to her coach Neil

Now it’s Sue’s turn and when she loses the first two sets against her old rival Peric-Rankovic we fear that this is not going to be the day that she finally beats the Serbian world number one. However, Sue takes the early lead in the third set and wins it 11-4 and then goes 3-0 up in the fourth. Peric levels at 3-3 and then has match point at 10-9. Sue saves it and goes on to win the set 12-10 and level the match.

Sue has been here so many times before against Peric but in the fifth set it is the Serbian who shows signs of nerves with a number of errors and with Sue at match point Peric nets and we all leap to our feet again to applaud an ecstatic Sue who can hardly believe that after nearly ten years she has finally beaten her nemesis. 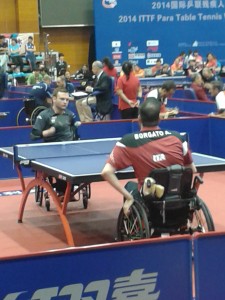 There is hardly time to congratulate Sue before Rob is back for his semi-final against Borgato. A very tense first set is finally won by Rob 15-13 and he takes control of the second and third sets, forcing the Italian into a series of errors to take the match 3-0. Among the interested spectators is Jean-Francois Ducay, who lost his quarter final earlier in the day to Changho Lee of Korea.

They should classify watching table tennis as an extreme sport - the mixture of nerves and adrenalin is exhausting and we are all glad of a break before the finals begin.

Will is first up and his final is scheduled for 15.00 and it will be in the TV court and shown live on national Chinese television. It follows the women’s class 10 final between Yang of China and Partyka of Poland which has gone the full distance and so Will is forced to wait while they finish. He has his headphones on and is pacing around the area next to the court but finally, with a triumphant blast of Polish horns it is Partyka who wins the gold and Will can start his match. 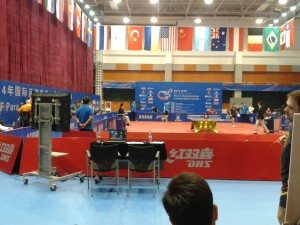 He is taking on the world number one Maksym Nikolenko and it is the Ukrainian who takes the first set 11-9. Will is playing well but Nikolenko is playing better and he takes a 7-1 lead in the second. Will somehow keeps his belief and slowly but surely he starts to reduce the deficit, trying not to give Nikolenko the chance to unleash his powerful shots. Six points in a row and Will is level at 7-7 and then has two set points at 10-8. Will nets and then goes long: 10-10. Just to add to the tension a bit more the umpire gets up to wipe the table but then Will takes the next two points and the set 12-10. Phew! It would have been a long way back from 0-2 but he’s back on level terms at 1-1.

As Will’s final started late it has clashed with Sue’s and word comes through to those of us watching Will that Sue has lost 3-0 to the Chinese world number two Zhang. A disappointing way to finish after her great win in the semi-final but she has a silver medal and has done us proud.

In the third set Will quickly moves to 7-2 and although Nikolenko pegs him back to 7-6 Will takes four points in a row to take the set and now leads 2-1. Can we dare to dream? Not yet. The momentum can change so quickly in table tennis and Nikolenko is a great player and will not give up without a fight.

In the fourth with Will 1-3 down a shot from Nikolenko hits the top of the net and drops short out of Will’s reach. Suddenly he is 2-8 down and the set runs away from him as Nikolenko starts to find the table again with his flying shots. Two sets all - it’s now become a sudden death showdown.

YES!!!!! For what seems like the first time in the match Will gets a lucky edge and the ball spins out of Nikolenko’s reach. Will is World Champion and he pulls his shirt off and throws it into the crowd before falling on the floor overcome with the emotion of the moment. Will is WORLD CHAMPION!

“It wasn’t a great celebration,” he admits later. “I tried to rip my shirt and I couldn’t rip it so I tried to take it off and it wouldn’t come off.”

With hardly time to put on his track suit top Will is whisked off for the medal ceremony which is sadly taking place at the same time as Rob’s final so some of us head to the competition hall to cheer on Rob while the rest go to the ceremony to see Will receive his gold medal.

Rob has lost the first set against Changho Lee but is fighting back in the second and takes it 14-12. However, the Korean is playing a great match and takes the third set 11-8. Rob is such a battler that we still hope he can turn it around but Lee is too strong today and although Rob saves a match point at 9-10 with a great return Lee clinches the set on his second match point to win the final 3-1 and the gold medal.

Rob is desperately disappointed but silver at the Worlds is something to be very proud of and knowing him he will come back stronger from this defeat.

There is some confusion about the timing of the medal ceremony for Sue and Rob but it eventually gets underway and hopefully they both feel a bit more cheerful with the medals round their necks. BBC Wales want to interview Rob and BBC South call to speak to Will as news of their success reaches the UK.

It’s been a great day and a very emotional one. While Rob and Sue can relax Will has the team competition to focus on now and he and Paul will start their bid for a medal tomorrow at 16.00 local time as will Jane and Sara, while Kim and Aaron start us off at 14.00.

One gold and two silvers - can we add to our medal tally over the next few days? With this team anything is possible.